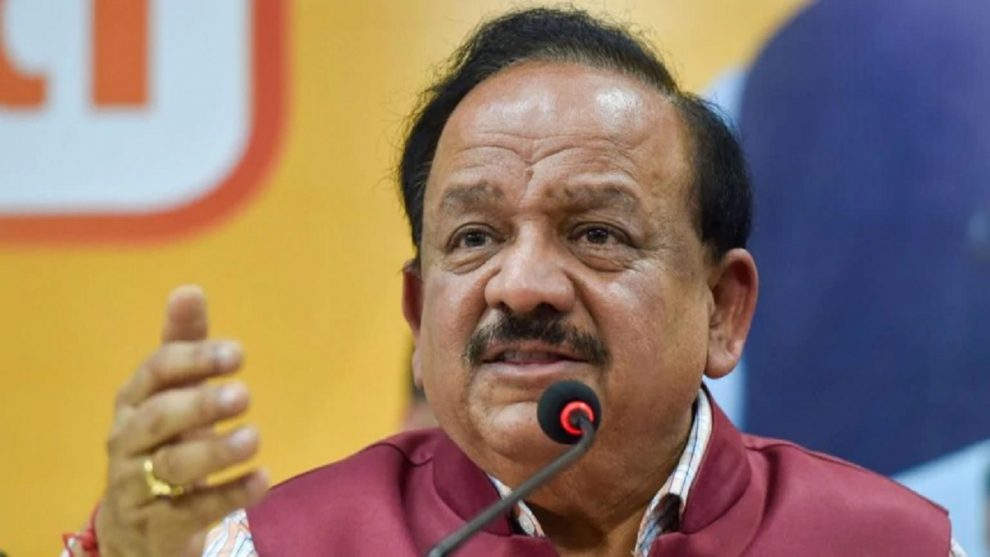 Union Health Minister Harsh Vardhan on Wednesday accused the Maharashtra government of “misgovernance” in tackling Covid-19, saying that it has followed “utterly casual approach” and is putting the residents in danger “by letting people escape institutional quarantine mandate for the sake of their personal vasuli”.

In a statement, the Health Minister said he had seen statements made by public representatives in Maharashtra about the shortage of vaccines and asserted that it was nothing but “an attempt to divert attention from Maharashtra government’s repeated failures to control the spread of pandemic”. The minister said the “lackadaisical attitude of the state government has singularly bogged down the entire country’s efforts to fight the virus” and the lack of efforts of the part of the state government “is now clearly visible and come to haunt us all”.

Earlier, Maharashtra Health Minister Rajesh Tope said that the state has only 14 lakh doses of the Covid vaccine and may run out of it in three days. The minister has urged the Centre to give priority to Maharashtra since the state has more Covid cases and a higher death toll.

Dr Harsh Vardhan accused the MVA government in Maharashtra of focusing its energies on “playing politics and spreading lies to create panic”. “The inability of Maharashtra government to act responsibly is beyond comprehension. To spread panic among the people is to compound the folly further. Vaccine supplies are being monitored on a real-time basis, and state governments are being apprised regularly about it. Allegations of vaccine shortage are utterly baseless,” he said.

He also said there had been regular comments by leaders from Chhattisgarh that are intended to spread misinformation and panic on vaccination. The minister said by their actions, the leaders of Congress government in Chhattisgarh “have the dubious distinction of being perhaps the only government in the word to have incited vaccine hesitancy”.

“I would like to humbly state that it would be better if the state government focuses its energies on ramping up their health infrastructure rather than on petty politicking,” he said.

The minister said that in Punjab, the high case fatality rate needs to be improved by early identification of those needing hospitalisation. Harsh Vardhan said that the performance of the Maharashtra government in terms of vaccinating healthcare workers and frontline workers is also not great.“It is shocking to see how the state government is putting Maharashtrians in danger by letting people escape institutional quarantine mandate for the sake of their personal vasuli. Overall, as the state has lurched from one crisis to another, it seems as if the state leadership is happily sleeping at the wheels.

“The Maharashtra government needs to do a lot more to control the pandemic and the Central government will help them in all possible ways. But focusing all their energies on playing politics and spreading lies to create a panic is not going to help the people of Maharashtra,” he said.

In his comprehensive statement, the minister said he had in recent days seen with growing dismay a number of irresponsible statements from some state government functionaries in the context of the Covid-19 pandemic.

“As these statements have the potential to mislead the public and spread panic, it has become necessary to put the record straight. At a time when the country is witnessing a fresh wave of rising Covid-19 infections, I am alarmed to note the fact that many state governments have failed to take appropriate response measures and apply the lessons that the nation has learned over the past year of handling this pandemic.”

“Throughout the last year, as the Health Minister of India, I have been a witness to the misgovernance and utter casual approach of Maharashtra Government in battling the virus,” the Health Minister said. “We, in the Central government, have regularly counselled the Maharashtra state government, made them available all resources and sent central teams for help. However, the lack of efforts of the part of the state government is now clearly visible and come to haunt us all.

“Today, Maharashtra not only has the highest cases and deaths in the country but also has one of the highest test positivity rates in the world! Their testing is not up to the mark and their contact tracing leaves a lot to be desired.” He said the Maharashtra government needs to do a lot more to control the pandemic and the central government will help them in all possible ways.