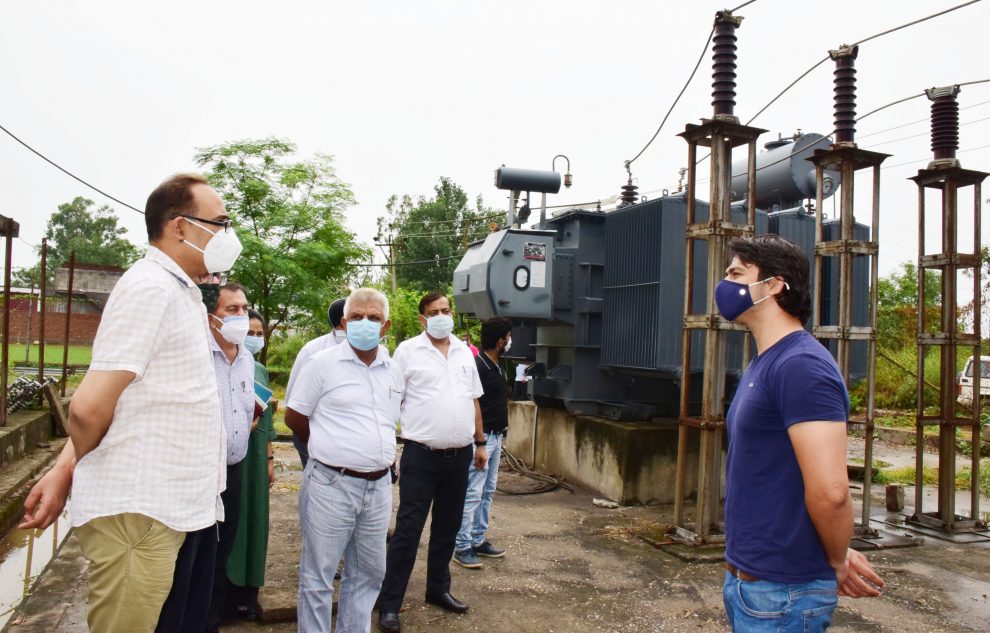 Power theft to be strictly proceeded against, staff to be accountable

JAMMU, JULY 10: Principal Secretary, Power Development Department, Rohit Kansal directed the officers of the Power Department to ensure that problems of tripping at 33 and 11 KV level and issues of low voltage were expeditiously addressed. He was on an extensive tour of the various power stations of Jammu district. The visits were aimed at inspecting the state of infrastructure, identifying the lacunae and for ensuring proper power supply to Jammu.

During the visit, Kansal inspected various receiving stations, including those at Gajansoo, Marh, Purkhoo and Barnai. While inspecting the status of the receivers, transformers and overall maintenance of the stations, he took a serious note of the deficiencies including isolators, transformer breakers, spare power cables and LAs. He also took note of overloading at various feeders. He took particular cognizance of the fact that transformers breakers had not been installed and directed that R&M be carried out immediately and all faults rectified.

At Purkhoo station, Kansal directed that all maintenance schedules especially preventive maintenance be strictly followed so that potential problems are identified and rectified well before they could cause any damage. Responding to the demands of the public, he directed that the Receiving Station at Kanachak be made functional in a week’s time positively and that the executing agency be pulled up for its laxity in completing the work.

Rohit Kansal also visited the newly augmented Barn Grid Station which would be dedicated to the public soon and also held a meeting with senior officials of the department at Canal Grid Station. He emphasized proper maintenance and cleanliness besides strict adherence to safety measures for protection of the workers as well as the equipment.

He later chaired a meeting of senior officers to take stock of the overall supply position and other issues. He directed the senior officials to submit regular reports about date and time of power outages, voltage drops and trips. He also emphasized that it was imperative to eliminate power theft and reduce losses.

He asked the Chief Engineer to submit monthly reports containing details about inspections conducted, revenue generated and fine recovered by officials from the level of Junior Engineer up to the level of AEE. The Principal Secretary exhorted upon the officers to maintain history sheet of transformers and to ensure that power revenue increases by introducing transparency in the system. Rohit Kansal maintained that illegal connections would not be tolerated at any cost and called upon the officers to impose penalty on the guilty found involved in the practice.

He also issued strict directions  that no station should ever curtail power supply without proper approval from the competent Chief Engineer and that too under strict adherence to the guidelines and SoPs prescribed for the purpose. Taking note of the issue of shutdowns in distribution system at 33kV and 11kV System, he directed that as per the Standard Operating Procedure (SoP) powers stand delegated to the officers of Distribution Corporations with step by step procedure which must be followed right from the requisition of shut down till cancellation of the same which is essentially required for safety of life and property and for proper load management.