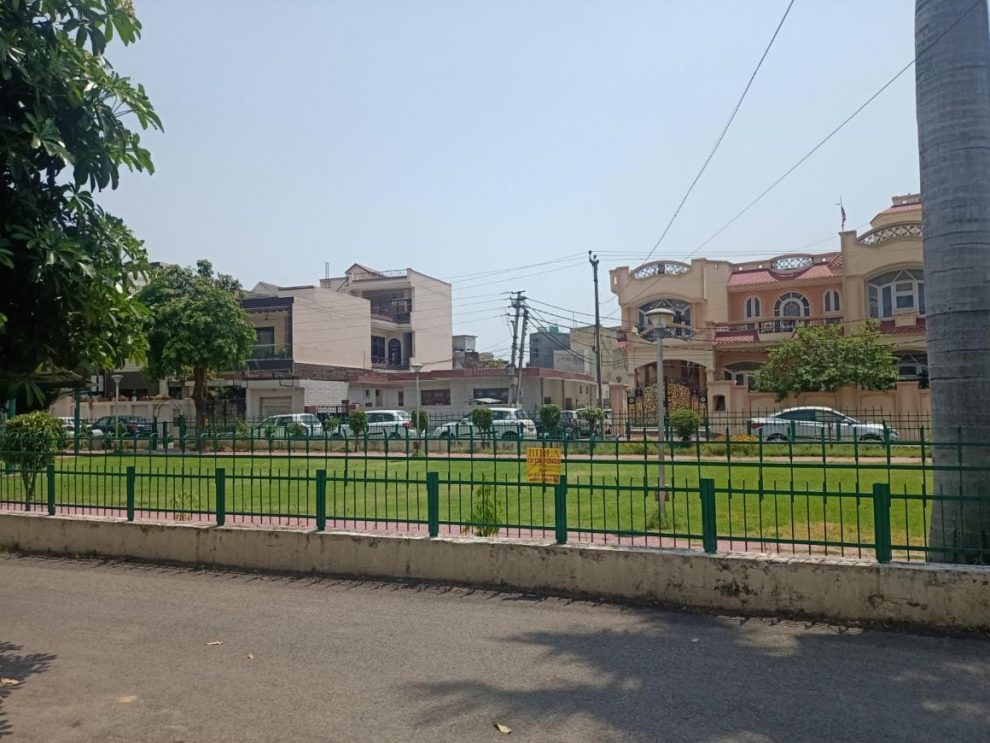 JAMMU: Pressing the panic button for around 400 odd rich and elite of Jammu and Kashmir, the Housing Board is on the back foot on its much talked about order of retrieving the designated ten-feet strip on fronts of the residential houses in Jammu’s plush Gandhi Nagar colony.

It is reliably learnt that authorities have been told to abandon the ongoing process at this moment for a policy decision later on. The Department of Housing and Urban Development is believed to have asked the Housing Board to not press any further on retrieving the ten-feet strips in Gandhi Nagar area. Sources said that this happened after massive local pressure and political intervention at a higher level.

The Housing Board notice, even as bad in law in perception of residents, alerted every individual dweller of Gandhi Nagar as a number of them made use of their contacts and influence to see that demolition of boundary walls and other structures doesn’t happen.

The issue of retrieval of a ten-feet deep strip on the front side of the houses for the widening of the road has been around for a year but the last one month has been of panic for the residents. On October 8, 2021, Shahid Saleem, the Managing Director of the Housing Board, put out a public notice asking the residents to voluntarily vacate ten feet space by or before November 7. Otherwise, the notice said, the authorities would demolish the boundary walls or other structures to retrieve the land.

The retrieval of the ten-feet strip in Gandhi Nagar was a wider project of the former Chief Secretary BVR Subrahmanyam who cast an entirely new political, social, cultural and economic landscape so as to absorb the Constitutional and administrative changes of August 2019. Involving a range of departments such as Forests, Revenue and major agencies under the Housing and Urban Development had removal of alleged encroachments and evictions as the central theme of the ‘change’.

The Gandhi Nagar colony, conceived as such in the 1960s by the then ‘Prime Minister’ Bakshi Ghulam Mohammad, is populated by a diverse cluster of rich and influential people including politicians, bureaucrats and businessmen. Above 70 percent of Gandhi Nagar’s population is of the original dwellers of Jammu city while remaining are wealthy, powerful and influential from across Jammu and Kashmir.

Bakshi had motivated government officials, prominent citizens, educationists, businessmen, traders, politicians etc to buy the plots on very concessional rates in a bid to establish this colony . The area was almost a jungle and the people were reluctant to move here.  Since the residents of old Jammu city were reluctant to move out of their comfortable familiar environs, Bakshi reportedly took personal interest in persuading the people to buy plots and gave all sops like quick house building allowance, available additional roadside strips etc. The colony was planned beautifully and it is still the best livable Colony in J&K even after the passage of six decades. The Town Planners had kept lot of open spaces, parks and very wide roads and back lanes.

The Gandhi Nagar residents are of the opinion that the case of encroachment is based on an entirely wrong premise. The road width of four of the five roads identified for demolition was 40 feet in 1960 which is corroborated from the building plans approved then and even today it has the same width, in fact in some cases more than 40ft. The building plans of houses approved in the sixties clearly indicate this width, say the residents. This is, they say, reflected in the Gandhi Nagar Colony’s layout plan revised in 2007 as well.

In a statement, Chander Uday Sharma the Secretary General of the Gandhi Nagar Residents Association said that while the Housing Board created in late seventies, has failed to create more housing colonies in the fast expanding winter capital as per its statutory mandate except Channi Himmat, it is trying to cover up its abject failure to meet the housing needs of the people by raising this unnecessary issue to harassing residents.

The Secretary General had on November 7 appealed to the Lieutenant Governor to “appreciate that 60 years is a long period and many of the original allottees have since passed away and the second or third generation is living these houses. In many cases, the properties had changed second or even third hand as this land is free-hold.  Many others had partitioned the original plots as a consequence of family settlement.  So, the fact is that most of the present occupants might not have full record. The Colony was not created by the Housing Board but the Housing Department of the J&K Govt and as such doesn’t have legal right to demolish structures.

“During the past sixty years, thousands of building plans for construction of houses on these allotted plots in Gandhinagar colony were approved by the Jammu Municipal Corporation showing the same 40ft width of the road in the front. Moreover, the same Housing Board had been issuing NOC for the approval of building plans. It is beyond our comprehension as to why the Housing Board is targeting us?

“Whatever may be the objective of this coercive action to force the residents to vacate 10-ft front strip after 60 years, it could only be achieved by demolishing hundreds of concrete structures as the residents are not willing to give in and would fight it out. The concrete structures that had been allowed to come up on these strips all along were raised with the tacit support of authorities of JMC and Housing Board.

“Most of these constructions had since been compounded through the State Administrative Tribunal and thus stand regularised. Intriguingly, the authorities which are now forcing plot holders to vacate land are the same who directly or tacitly, are responsible for all types of violations including commercialization of residential areas.  Covering up their complicity and laxity cannot be the basis for harassing nationalist residents of Gandhi Nagar now.

In their appeal to the Lieutenant Governor seeking his personal attention into the matter, the Gandhi Nagar Residents Association mentioned the “peace loving and nationalist people” while describing the demography of the colony’s population.  The statement further said that the public notice of 8th October, 2021 of the Managing Director is arbitrary, ill-conceived and bad in law to harass the peace loving nationalist house owners which has let loose a reign of uncertainty of possible huge demolition in Gandhi Nagar.

They also said “MD has mischievously made a case for all out demolition on willfully wrong and flawed ground of encroachment of five roads whereas the fact remained that no road was ever encroached by the residents”. While the statement was carefully worded, in the background there are allegations of communal intents of Shahid Saleem, the Managing Director of the Housing Board. In the political circles and other social conversations communal intent is being attributed as the reason behind the anti-encroachment drive. Interestingly, the same officer, Shahid Saleem, was hero of the same people, the Gandhi Nagar residents, not long ago, for retrieving a prime piece of land from possession of a Muslim family.

In December last year Saleem had run a midnight operation with assistance of a huge contingent of paramilitary forces to retrieve seven kanals of prime land valuing over Rs 100 Crores. The land was in dispute between the department and the local Gujjar family. The eviction and subsequent sealing of the land was then widely seen as an action that could have been possible only in a post August 5, 2019 environment. Shahid was then hailed as a hero, an upright officer who works efficiently, without any bias.

Why Jammu & Kashmir should have an advisory council, at least
Modernisation of Indian Armed Forces through Indigenisation
Comment