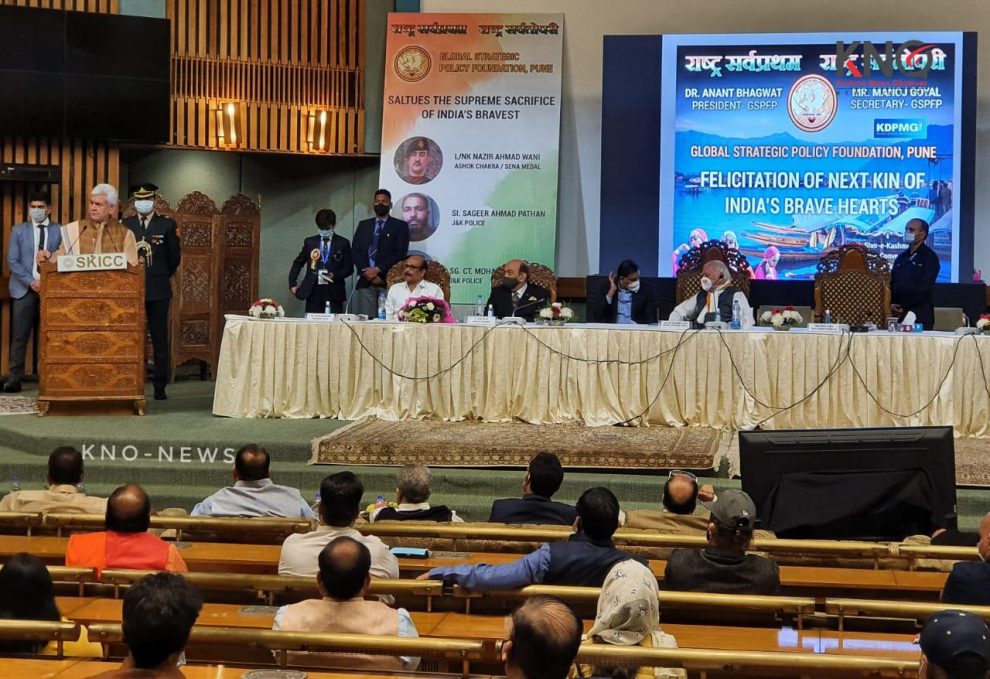 No words to pay tribute to heroes of J&K police, army who made supreme sacrifices fighting militancy, enemy; working on a policy to include contribution of slain police men, soldiers in school curriculum, won’t allow a single penny of Budget money to be misused

Srinagar, Apr 04: Jammu and Kashmir Lieutenant Governor Manoj Sinah Sunday said that the UT is moving ahead with a “new vision and new thought” where there is no place for militancy and its supporters.

He said that J&K government is working on a new educational policy to incorporate contributions made by the heroes of J&K police and Indian army who have made supreme sacrifices fighting militants and enemy, in the school curriculum.

Addressing a function organsied by the Global Strategic Police Foundation, Pune to felicitate the NoKs of slain policemen and soldiers, at SKICC on the banks of famous Dal lake here, the LG said that he has no words to pay tributes to the policemen and soldiers who laid down their lives either fighting militancy or protecting borders. “It is because of their great sacrifices, we are breathing in free air today. I salute to all the brave men from police and the army who sacrificed their lives in line of duty,” the LG said as per news agency—Kashmir News Observer (KNO)

Present on the occasion were parents, wives and children of slain policemen and soldiers. He said J&K government is working on a policy to include great contributions of slain heroes from police and the army in the J&K school curriculum. “This we are doing so that our children come to know about the great sacrifices of policemen and soldiers who laid their lives for a peaceful and better J&K. Our children should know that it is because of the sacrifices of these heroes, they are reaping peace dividends in J&K,” the LG said.

He said J&K has received a huge budget for the current year and not a single penny will be misused. “Anyone who is found misusing the budget money will face serious action,” the LG said.