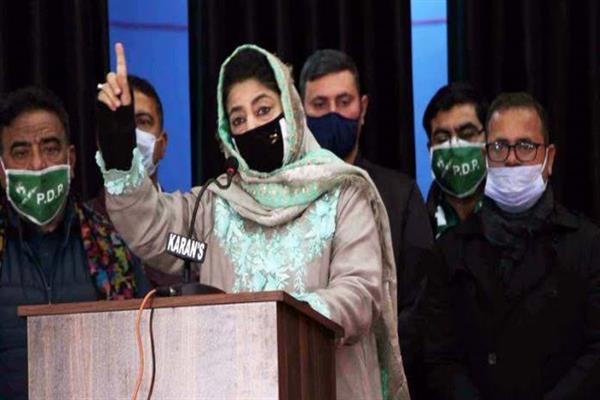 JAMMU: PDP chief Mehbooba Mufti on Saturday reiterated her call to the BJP government for dialogue with Pakistan and the people of Jammu and Kashmir, saying that peace would be elusive as long as Kashmir remained unresolved.

She called upon people to vote for the constituents of the People’s Alliance for Gukpar Declaration (PAGD) an alliance of several parties, including the National Conference, PDP, and Communist Party of India (Marxist) – in the next assembly elections to defeat the BJP’s attempt to gain power and seal its wrong decision to abrogate Article 370.

Kashmir has been awaiting a solution for the last 70 years there will be no peace in the region until the Kashmir issue is resolved, and for that, dialogue with Pakistan and the people of Jammu and Kashmir is imperative, the former chief minister said.

Addressing a workers convention in Ramban on the last day of her week-long tour of Jammu, the Peoples Democratic Party chief sought to know, Prime Minister Narendra Modi and former Prime Minister Atal Bihari Vajpayee both visited Pakistan, but why do they (BJP) feel perturbed when we speak about it (holding dialogue with the neighbouring country).

Mehbooba alleged that the present government was only speaking the language of oppression by sending the youth to jails in and outside the union territory. Calling out the BJP over its claims that the party had set everything right after the abrogation of Article 370, she said, If their claim is true, what is the need to deploy 10 lakh soldiers in Kashmir?

Asking the people to vote for the PAGD irrespective of whether the parties form a coalition or go solo in order to keep the saffron party out of power, she said, The BJP wants to grab the power and put a stamp on its wrong, unconstitutional, and illegal decision of August 5, 2019. We have to demonstrate maturity and use our votes to defeat their designs. Mehbooba also took a dig at the BJP for renaming the Nashri tunnel on the Jammu-Srinagar national highway after former leader Syama Prasad Mookerjee and said a local politician or a saint’s name would have been better.

Asking the people to maintain communal harmony, she said, We have joined Mahatma Gandhi’s India and they want to turn it into his assassin Nathuram Godse’s India. Jammu and Kashmir have already slipped out of their hands and it will further slip away if corrective measures are not taken.

In response to a question on the movie The Kashmir Files, based on the exodus of Kashmiri Pandits in the 1990s, the PDP president said the BJP is promoting it with the intention of polarizing people.

Instead, an effort by the BJP to rehabilitate the Pandits in the last eight years would have been better, she quipped. Calling the delimitation commission BJP’s commission, Mehbooba said her party had already rejected it. The commission, through its draft proposal, has left everything in disarray. We have no faith in it, she said. (PTI)