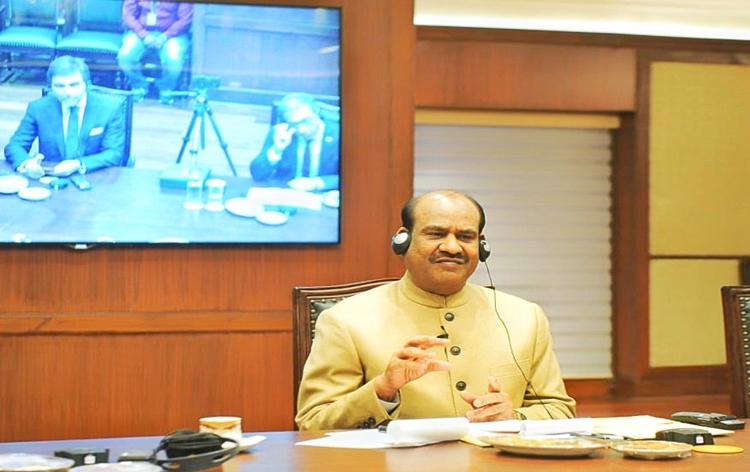 Lok Sabha speaker Om Birla has said that no parliament should discuss laws passed by other Parliaments and internal issues of other sovereign countries. Mr Om Birla made this statement when President of the Inter-Parliamentary Union (IPU) Duarte Pacheco called on him at the Parliament House in New Delhi yesterday evening. Mr Duarte Pacheco is on a week-long visit to India on the invitation of Indian Parliament. IPU President will attend a felicitation ceremony and address the India’s Parliament Members this morning.

Referring to the strong, historical ties of India with the IPU, Mr Birla said that India has a rich democratic and cultural heritage of thousands of years. He said that the Constitution of India has guided the country on the path of prosperity.

Acknowledging the positive role played by IPU in the field of international cooperation, Mr Birla said that the IPU is playing a vital role for national parliaments and for voicing their concerns at the international level.

Mr Birla observed that India has twice organised IPU conference in 1969 and 1993. Former Presiding Officers – G S Dhillon and Najma Heptulla had been IPU presidents in the past.

Mr Birla said that both India and IPU share the same global vision of strengthening democracy. He also said, Collective vision of India and IPU, is democratization of governance at the international level.

Mr Birla appreciated the Portugal government for their support to India’s point of view for re-organisation of the UN Security Council and India’s permanent membership of the Council.

Referring to the challenges of COVID19, Lok Sabha Speaker emphasized that India has always played the role of a responsible international partner. He said, India has supplied COVID related treatment materials to more than 154 countries and it has deployed rapid response teams in several countries to tackle the COVID19.

Mr Birla also said, with its capability in COVID vaccines, India has emerged as ‘pharmacy of the world’.