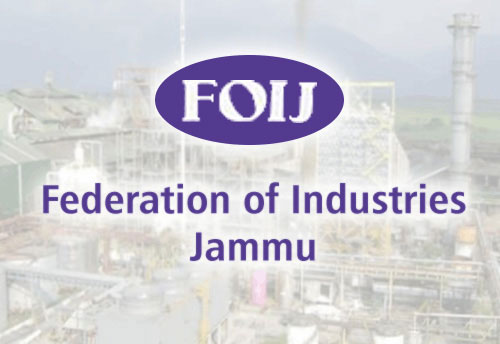 Jammu, Feb 22: Federation of Industries Jammu (FOIJ) on Monday urged the central government and UT administration to save the existing Industrial units of J&K from closure.

The association while holding a press conference at Press Club Jammu said that due to non- availability of central government fiscal incentives as per Industrial Development Package 2021 for new units may leave thousands of local workers jobless.

Chairman FOIJ Lalit Mahajan said that while going through the notification of the central government regarding industrial development package, there is nothing for the existing unitholders who are running their units despite facing all odds.

He said that existing units are already providing jobs to around 4 lakh people but there is no benefit for them in the package.

“We have somehow managed our units despite facing challenges in the last 30 years and the package of incentives in the past was for everyone and this one too should have been for new ones along with existing ones,” Mahajan said.

Mahajan said that the way the government is going, “it seems in coming time we have to close our units and 4 lakh more people will become unemployed and the central government will be responsible for it”.

“If incentives will be for only new ones, then how can we compete with them in coming time,” he said, adding that there is a need to take everyone on board as the government is aware of the situation in J&K post abrogation of article 370.

Mahajan said all fiscal incentives of both state and central government have been diluted after GST implementation which has resulted in very limited growth of units.

“We urge the Governor to look into the matter and save existing units from closure,” he said.