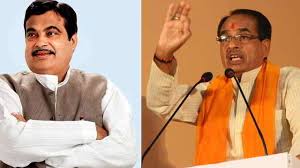 : Madhya Pradesh Chief Minister, Shivraj Singh Chouhan is scheduled to meet Union Minister Nitin Gadkari in the national capital on Monday and is likely to discuss state’s infrastructure projects.
“Madhya Pradesh Chief Minister Shivraj Singh Chouhan will meet Union Minister for Road Transport and Highways Nitin Gadkari in Delhi on Monday,” the Chief Minister’s Office informed.
The senior leaders are likely to discuss the Central Road and Infrastructure Fund (CRIF) to boost the connectivity via roads in Madhya Pradesh.
“The Detailed Project Report (DPR) of Atal Progress Way, an important project of Gwalior Chambal region will also be discussed,” the CMO added.
On January 17, Madhya Pradesh Chief Minister expressed gratitude to Prime Minister Narendra Modi for flagging off eight trains connecting the different regions of the country to Kevadiya in order to facilitate seamless connectivity to the Statue of Unity.