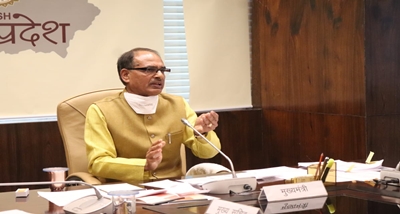 Chief Minister of Madhya Pradesh Shivraj Singh Chouhan has said that  NITI Aayog’s six-point agenda will be implemented in the state within the time-limit. He made the statement at the sixth virtual meeting of the Governing Council of NITI Aayog under the chairmanship of Prime Minister Narendra Modi on Saturday.

Chief Minister Shivraj Singh Chauhan has said that Madhya Pradesh is committed to achieving the target of Rs 10 lakh crore GDP this year to make India a five-trillion-dollar economy by 2024.

He suggested that in the private sector, the initiative can be taken to generate solar energy and develop forests in the degraded forest area spread over 30 lakh hectares in the state.

Chief Minister also informed about the roadmap for Atmanirbhar MadhyaPradesh and initiatives being undertaken to encourage vocal for local in the state.

Need to increase pace of coronavirus vaccinations: Govt tells states
Tenth round of Commander level talks between India and China to discuss further course of action after disengagement concludes in Moldo on Chinese side
Comment