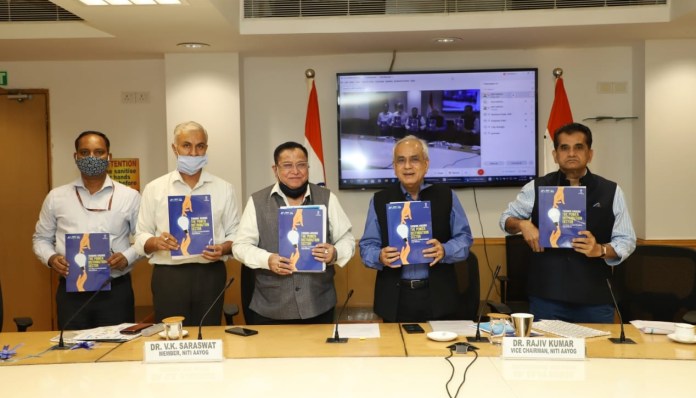 NITI Aayog today released a report thatpresents reform pathways that can transform the country’s power distribution sector, in a step towards improving policymaking in this area.

Most power distribution companies (discoms) in India incur losses every year—total losses are estimated to be as high as Rs 90,000 crore in FY 2021. Due to these accumulated losses, discoms are unable to pay generators on time, make investments required to ensure high-quality power, or prepare for greater use of variable renewable energy.

The report presents a review of reform efforts in the Indian and global power distribution sector. It extracts the learnings and best practices from the wealth of policy experience that exists in the country. ‘This report examines many important reforms, such as the role of the private sector in distribution, power procurement, regulatory oversight, integration of renewable energy, and upgradation of infrastructure,’ said NITI Aayog ViceChairman Dr Rajiv Kumar. ‘A healthy and efficient distribution sector is essential, whether for improving the ease of doing business, or for improving the ease of life.’

The report is divided into chapters focusing on structural reforms, regulatory reforms, operational reforms, managerial reforms, and renewable energy integration. Dr VKSaraswat, Member (NITI Aayog) said, ‘This report presents policymakers with a menu of reform options to put the distribution sector on the track of efficiency and profitability. NITI will partner with some of the states to take these reforms forward.’

Highlighting the need for addressing current challenges, Clay Stranger, Managing Director, RMI said, ‘A robust and long-lasting solution to the woes of the discomsrequires changes in policy as well as organisational, managerial, and technological reforms. Different states have travelled along different pathways of reforms, giving a rich set of policy experiments to learn from.’