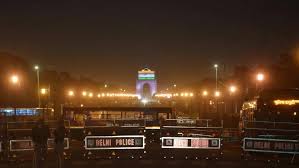 Night curfew will be imposed in prominent places across the country in view of New Year celebrations amid COVID pandemic.

In national capital Delhi, night curfew will be imposed for today and tomorrow to check the gatherings, congregations and public celebrations of New Year. The assembling of more than five persons at public places as well as New Year celebratory events and congregations at public places will not be permitted from 11 P.M. tonight to 6 A.M. tomorrow and also from 11 P.M. tomorrow to 6 A.M. on the next day.

However, there will be no restriction on inter-state and intra-state movement of persons and goods during the curfew period. The decision has been taken in view of threat posed by the mutant UK strain of COVID-19 virus and after observing the local incidents of the pandemic in the national capital.

In his order, Delhi Chief Secretary and Chairman of City Disaster Management Authority, Vijay Dev said, all District Magistrates of Delhi and  their counterpart District Deputy Commissioners of Police and all authorities concerned will ensure strict compliance of this order and will adequately inform and sensitize the field functionaries about these instructions for strict compliance.

Meanwhile, the exit from Rajiv Chowk Metro Station in the national capital will not be allowed after 9 P.M. onwards today. However, the entry of passengers will be allowed till the departure of last train.

The Karnataka Government has issued guidelines on the New Year eve celebration across the state. Section 144 is imposed since noon today preventing over five people from congregating in one place. This will be in place till tomorrow morning at 6 A.M. In Bengaluru, vehicle movement is regulated on important roads. Flyovers will be closed for vehicular traffic from evening today.

Parking has been banned on Mahatma Gandhi Road and its surroundings after 4 P.M. today. Police Department has issued warning against those who take part in wheeling and drag races causing harm to others. Teams are also set up to check drunken driving. Home Minister Basavaraj Bommai has informed that police are put on after a new variant of the COVID virus was found in the passengers who arrived in Bengaluru from the UK.

Speaking to media persons in Bengaluru today, the Health Minister Dr. K. Sudhakar informed that out of 199 members who were missing after arriving from the UK, 80 foreign nationals and 24 Indian nationals have now been located. The Minister added that the remainder of those missing will be located soon.

In Rajasthan, the state government has issued an order to impose night curfew in big cities of the state on the New Year eve. The Home Department has issued the order on the purpose that night curfew is imposed effectively to prevent the spread of Corona virus amid fears of new strains found in the UK. A night curfew on the New Years Eve will be in effect from 8 P.M to 6 A.M. tomorrow in all cities having a population of over one lakh. Markets in all these places will be closed at 7 P.M.

Chief Minister Ashok Gehlot has urged people to strictly follow COVID guidelines and not to organize any public function or party. Mr. Gehlot has also appealed people of the state not to burst firecrackers on New Year’s Eve.

In a press release issued late in the night, the Police pointed out that the Maharashtra Government has already issued guidelines related to New Year’s eve and called for low-key celebrations.

According to the release, night curfew is in place, prohibiting gathering of five or more persons between 11 p.m. and 6 a.m. Gatherings in restaurants, bars and pubs will not be allowed post-11 p.m. and the police has put restrictions on music systems to be used during the celebrations and said that playing loudspeaker/DJ music beyond permissible decibel limit is prohibited and even the fireworks is not allowed during the celebrations. Heavy deployment of force has been planned for monitoring celebrations and crowd control. The police has further said that Nakabandis will be set up to regulate traffic and action will be taken for drunken driving. In view of the possibility of transmitting infection through breath analysers, the police this time will do the checking of drunken driving using blood test analysis. Crime Branch, Anti-Narcotics Cell, Social Service Branch will remain active with the use of drones for surveillance.