In a statement, the NIA said that it filed a supplementary chargesheet against three accused persons namely Shaheen Ahmad Lone, Tafazul Hussain Parimoo and Waheed-ur-Rahman Para under section 120B of the IPC, sections 17, 18, 38, 39 & 40 of the UA (P) Act, and section 25 (1AA) of Arms Act and section 6 of the Explosive Substances Act in NIA Special Court Jammu in Devender Singh Case.

This case arose out of Police station Qazigund, Kulgam under FIR no. 05/2020 dated 11.01.2020 after the apprehension of two militants of Hizb-ul-Mujahideen (HM) namely Syed Naveed Mushtaq, the then-District Commander of HM for the district Shopian and Ganderbal and Rafi Ahmad Rather along with one serving DSP of J&K Police.

The statement further states that Devender Singh and Advocate Irfan Shafi Mir, near Al-Stop Naka, Qazigund while they were travelling from Srinagar to Jammu in the I20 car owned and driven by accused Advocate Irfan Shafi Mir. NIA had re-registered the case as RC-01/2020/NIA/JMU and had taken over the investigation. NIA had earlier filed a chargesheet against eight accused in this case.

The investigation has revealed that charge-sheeted accused Shaheen Ahmad Lone and Tafazul Hussain Parimoo were involved in gun-running from across the LoC for the militants of banned militant organisations Hizb-ul-Mujahideen (HM) and Lashkar e Taiba (LeT) and were also channelizing funds to the militants for sustaining militant activities in J&K at the behest of handlers located in Pakistan.

An investigation has also revealed that charge-sheeted accused Waheed-ur-Rahman Para was part of the conspiracy for raising and transferring of militant funds to Hizb-ul-Mujahideen (HM) militants for procurement of terrorist hardware and was also a crucial player in sustaining the political-separatist-militant nexus in J&K. Further investigation in the case continues, reads the statement. 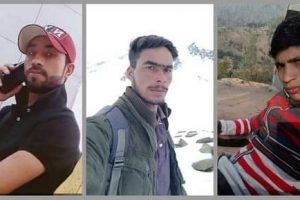