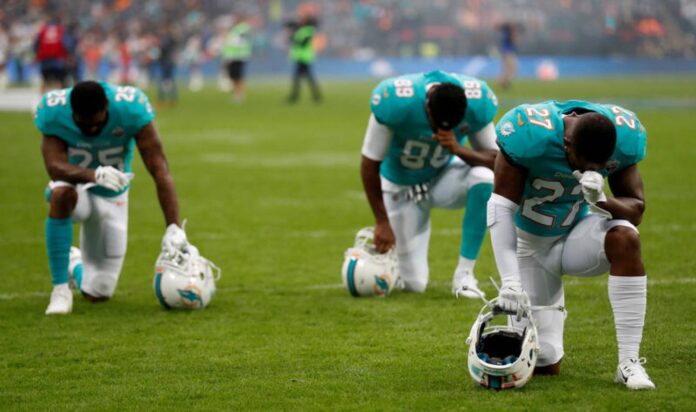 NEW YORK: Houston Texans safety Michael Thomas said he believes a new era of athlete activism is taking hold four years after he made the then-risky decision to kneel down instead of standing during the pre-game U.S. National Anthem ceremony to join Colin Kaepernick’s anti-racism protest.

Along with a handful of other players, Thomas was among the pioneers who embraced NFL quarterback Kaepernick’s protest during the anthem in 2016, weeks after police officers killed two Black Americans, Alton Sterling in Louisiana and Philando Castile in Minnesota.

Thomas and the other protesters were harangued by many fans, broadcasters and public officials including U.S. President Donald Trump, who said a year later that any NFL player who kneels during the anthem is a “son of a bitch.”

“(We) were called everything but a son of God,” said Thomas, then a player for the Miami Dolphins, reflecting on the widespread criticism at the time.

No NFL team signed Kaepernick after he became a free agent in March 2017. He eventually filed a collusion grievance against the league.

“Four years ago our careers — the career trajectory has been altered and changed and something we can never recover from, you know, we’ll never get that back,” he said.

“But just to be able to say, ‘Hey, from the start, we were in the frontline, fighting for it’ and now it’s very clear that we were on the right side of history,” said Thomas.

Kaepernick “opened the eyes of many people in this country, many athletes and he showed us just how powerful our platform was,” said Thomas, a member of the NFL Players Association (NFLPA) executive committee.

“Unfortunately, not everyone probably felt the same way at the time.”

Through his clothing company, Thomas worked with the players union to create t-shirts that will be worn on the field by all NFL players prior to Week 1 games. The shirts read: “Injustice against one of us is injustice against all of us.”

While he is aware a t-shirt won’t fix systemic racism, Thomas marveled at how far the players have come since the NFL first wrestled with Kaepernick’s on-field activism.

The NFLPA is mounting several social justice initiatives in 2020, including combating voter suppression.

League Commissioner Roger Goodell, set to appear on Wednesday with NFLPA Executive Director DeMaurice Smith in a televised discussion on social justice, has long been reluctant to endorse Kaepernick’s brand of on-field activism.

But Thomas believes “there’s no choice” but to get on board.