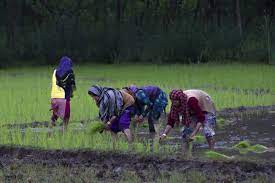 KULGAM: The varieties of rice which were distributed among farmers in Kulgam have shown good results, as farmers have managed to procure more produce against the usage of the traditional varieties.

Farmers from different areas of the district said that after trying the new variety of rice provided by the agriculture department, they have procured more crops this year and that too disease-free.

Subzar Ahmad, a farmer from Khudwani hamlet of the district, said that he was sowing traditional varieties but every year rice blast was common.

“This year I have tried SR3 rice given by the agriculture department and my produce is almost double and it is completely disease-free,” he said. “People who have sowed the traditional varieties were having the same problems this year again.”

Sheikh Ibrahim, another grower, said that the varieties given to them by the agriculture department have shown good results.

“I have four kanals of agricultural land, and the yield in the last few years was around 2.5 quintal per canal, however, this year it was around 4 quintal,” he said.

Chief Agriculture Officer Kulgam Farooq Ahmad said that SR3, SR4 and SR5 rice series have shown a very positive result on the ground as the yield is 4-5 quintal per Kanal.