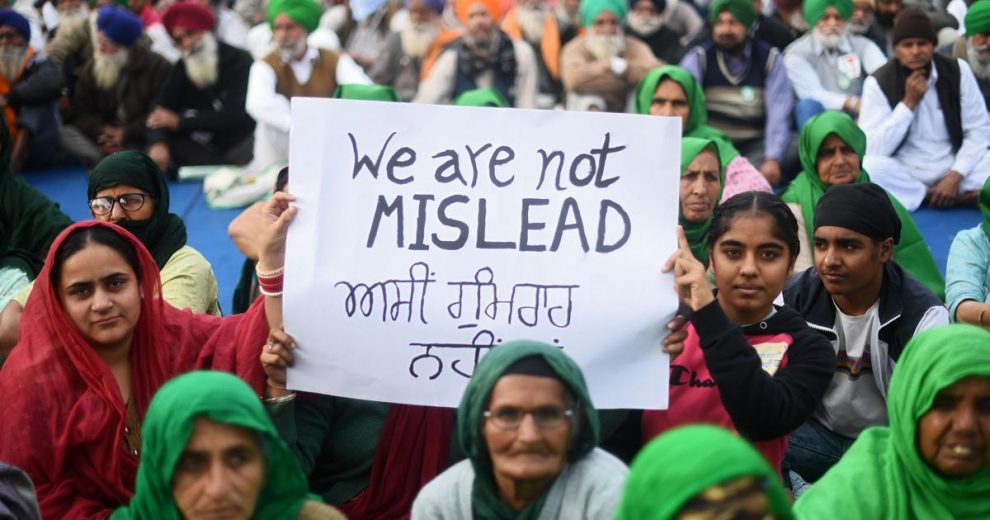 “Off with her head, arguments later”, ordered the Queen in Alice in Wonderland. A term synonymous in modern India which has come a long way from ‘Urban Naxals and Love Jihad’ to new connotations of lexicons we are familiar being added to our vocabulary.

Toolkit which meant a document created to explain any issue and how to address it, today has sinister nuances of supporting the ongoing farmers’ protests against the controversial farm laws by uploading details about their protest to incite mass movements etc. “Andolan jeevis” nee professional protesters seen at every agitation and FDI an acronym for Foreign Destructive Ideology instead of foreign direct investment. Resulting in a 22 year old student and climate activist Disha Ravi becoming a threat to the nation. Sic.

Her crime? Being a key conspirator in a ‘toolkit’s’ formulation and dissemination which was  used by Swedish activist Greta Thunberg in support of farmers protest. The toolkit’s purpose was to unleash a “digital strike-through hashtags #StandWithFarmers and tweetstorms  23 January onwards, physical action on 26 January and joining farmers march into Delhi and back to borders”.

She reportedly also collaborated with pro-Khalistani Poetic Justice Foundation to spread disaffection socially, culturally and economically against India, started a Whats App group to draft the toolkit and is one of the founders of Fridays For Future India, part of an international organization.

She is not alone. The Delhi Police is on the lookout for two of her accomplices, lawyer-activist Nikita Jacob and Shantanuin. Earlier stand-up comedian Munawar Faruqui, now on bail was arrested for posting a video for allegedly making “filthy and indecent jokes” about Hindu Gods and Goddesses and Home Minister Amit Shah along-with journalist Sidhique Kappan on his way to UP’s Hathras to cover the gangrape of a Dalit teen.

Not to forget a little known digital news portal New Click being raided by the Enforcement Directorate for getting foreign funding to spread fake news and Twitter being hauled up by the Government for not taking down accounts which “spread fake news, hatred and violence”. A Congress  MP and journalists have been charged with sedition for their tweets.

Aghast politicians, activists and academics are claiming India was becoming the theatre of  absurd demanding Ravi’s release.  The State is using sedition as an iron hand to curb free speech in an overreaction to people’s opinion. Countered the Government, “vested interest groups are trying to enforce their agenda on farmers’ protests and derail them. We want to save the country from their ideology and protect India’s nationalism from multiple attacks.

Questionably do these cases merit a case of sedition? Is our democracy so fragile that a 22 year old student can shake it? Is the Indian State standing on shaky foundations? Are our Constitutional institutions so brittle that they can crumble under the weight of tweets? Is a tool kit to support farmers protest more dangerous than the Chinese intrusion in Ladakh? Have we lost the ability to accept criticism and increasingly becoming a knee-jerk, reactionary country? Bordering on a narcissist phobia? Is the Government suffering from paranoia?

Clearly, the speed with which our tolerance is falling to breakable levels is worrying. Certainly, one can argue their actions were in bad taste, but in no way do they warrant arrest under sedition. The law Section 124A of the IPC is explicit: Any signs, visible representations, or words, spoken or written, that can cause “hatred or contempt, or excite or attempt to excite disaffection” towards the Government. It is only slapped in cases of a severe, intense, desperate crime where one takes up arms to threaten the legitimacy of a regime.”? By doing so does it not make a mockery of the concept of a “nation” built on the values of democracy?

Worse, some States like Assam and Jharkhand are emerging as sedition hotspots with 37 sedition cases each, accounting for 32% of all sedition cases between 2014-2018. Yet when it comes to conviction, the rate is abysmally low. Last year 10% cases were closed primarily, because of insufficient evidence or because the accused was untraceable.

Chargesheets were filed in only 17% cases and the conviction rate was a mere 3.3%, only four of 43 cases where trial was completed in five years. Last year 70 cases of sedition were filed to curb free speech and crack down on critical opinions by charging the “perpetrators” of spreading fake news.” In fact, the NIA is struggling to find evidence against those currently under arrest.

However, a low conviction rate of sedition offences is no reason to rejoice given the frequency of arbitrary arrests and pre-trial detentions. For even if a person is acquitted, the process itself is a punishment as he invariably spends long periods in prison and is lynched on social media. Moreover, judges are reluctant to give bail unless they have “reasonable grounds to believe” that the accused is not guilty.

Clearly, India is in the grip of self-styled chauvinism wherein critics, intellectuals or hoi polloi are soft targets with imprudent reactions taking over debates and calibrated decisions.  Life is lived in the slim strip called the official and every tweet, satire or defiance treated as a monster. Big deal if this makes public discourse impoverished and toothless.

As blinkered, dogma-ridden debates rage on it marks a dangerous political trend of intolerance vis-à-vis freedom of expression and personal choices. If this trend goes unchecked society will get dangerously dogmatic and fragmented. Think. As India marches ahead enroute to being Atmanirbhar our leaders need to realize in a mammoth one billion plus country there would be a billion views and one cannot curtail people’s fundamental rights. At the same time we need to desist from acerbic and speeches which spew hatred and narrow-mindedness.

What next? So do we pander to rabble rousers or muzzle their voices? Notably, no licence should be given to anyone to spread hatred or the perilous implications of their insidious out-pourings. They need to realise a nation is primarily a fusion of minds and hearts and secondarily a geographical entity.

Alongside, our netas need to realize criticism is a sign of a thriving and robust democracy. Take a lesson from how leaders world-wide are more tolerant about what’s written or depicted about them. Two classic examples of political freedom are former US President Trump who continues to be mercilessly satirized globally and former Italian millionaire-playboy-PM Berlusconi. In UK and France people take a lot of liberties vis-à-vis their rulers. At some point we need to realize that India was conceived as a democratic rather than majoritarian country wherein all citizens have certain basic rights. When it comes to democracy, liberty of thought and expression is a cardinal value that is of paramount significance under our Constitutional scheme. Our democracy will not sustain if we can’t guarantee freedom of speech and expression. What gives?