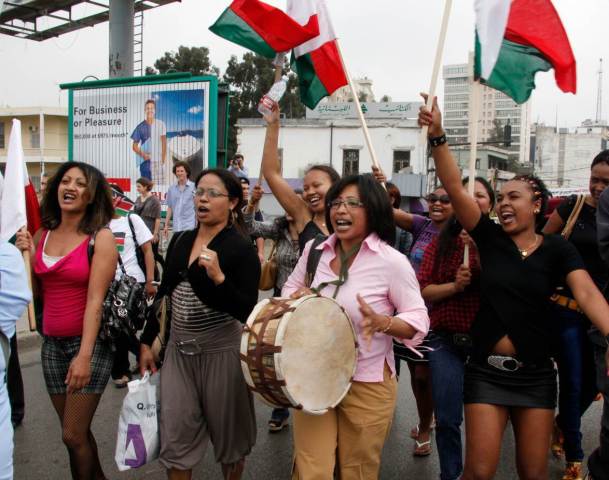 AMMAN: Rights campaigners said the launch of a new contract for migrant domestic workers in Lebanon was a positive first step but that far deeper reform was needed to abolish the kafala sponsorship system they blame for widespread labour abuses.

Caretaker Labour Minister Lamia Yammine said on Friday she had issued a standard unified contract that “enshrines the rights” of the foreign workers, whose plight during Lebanon’s economic crisis and COVID-19 lockdown sparked global outcry.

Rights groups warned, however, that strict enforcement including labour inspections and complaints procedures would be required to dismantle the kafala system, which binds migrant workers to one employer and is common in the Middle East.

“Having a brilliant contract according to international standards without a proper enforcement mechanism is only ink on paper,” said Diala Haidar, Amnesty International’s Lebanon campaigner.

“As we’re seeing today a number of workers were abandoned by their employers on the street without wages, without luggage, without passports, and no employer was held to account,” she told the Thomson Reuters Foundation.

The Labour Ministry did not immediately respond to requests for comment.

Amnesty and Human Rights Watch have blamed kafala and the inability to change jobs for the rampant abuse of migrant workers in many Middle Eastern countries including Lebanon.

In countries where kafala exists, migrant workers can be subjected to confinement, restricted movement and physical and sexual abuse, activists say.

As Lebanon reels from the impact of a deep economic crisis, the coronavirus pandemic and a powerful explosion that ripped through the capital, Beirut, on Aug. 4, many migrants were also left jobless, homeless and desperate to get home.

Lebanon’s estimated 250,000 migrant domestic workers, mostly from Africa and Asia, are excluded from the country’s labor law protections including requirement for a minimum wage, overtime pay and freedom of association, according to Human Rights Watch.

The Labour Ministry has not yet published the new contract, which Yammine said in a tweet would allow the migrant workers to “obtain all their contractual rights and benefit from the broadest social protections”.

Last year, a working group including representatives of Human Rights Watch and Amnesty proposed a draft of a unified contract agreement upon which the Labour Ministry had said it would base its version.

Haidar said a unified contract must guarantee a minimum wage, the right to change jobs or terminate the contract without losing legal residence status, to retain passports, and leave the house freely during rest periods.

“One of the main problems that still exists because of kafala is that the worker is living most of the time with her employer behind closed doors,” she said.

“Effectively this means as soon as I close the door nobody knows if I am enforcing the contract or not.”