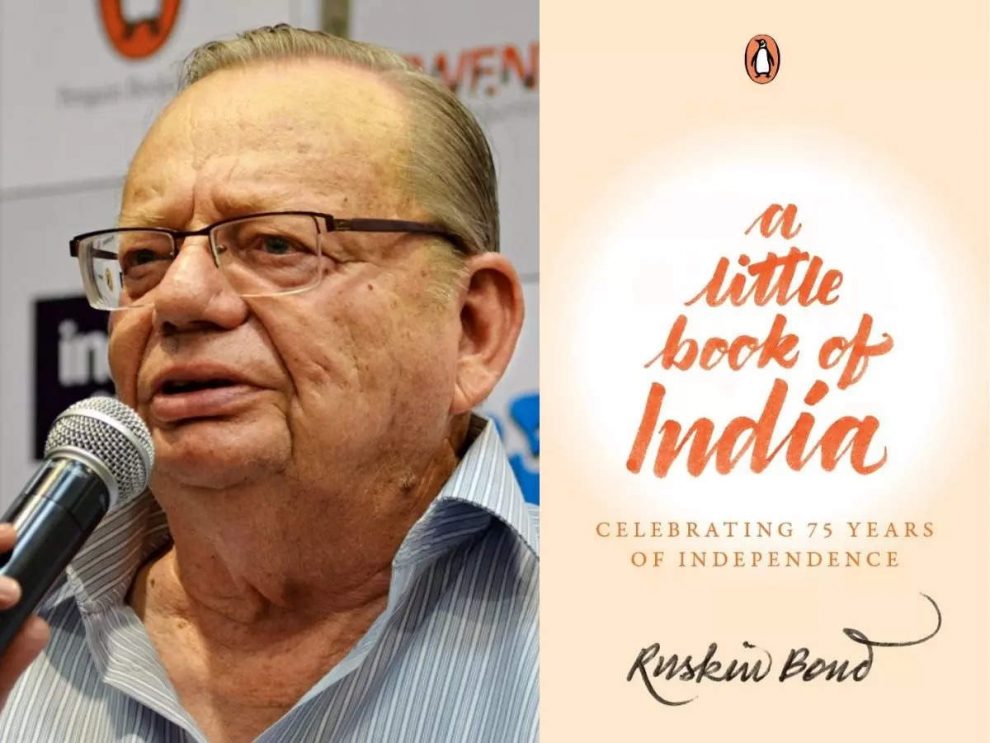 New Delhi: Jawaharlal Nehru was a man of the people and of many gifts and achievements, says veteran author Ruskin Bond in his new book and describes Prime Minister Narendra Modi as a man of humble beginnings, whose political acumen and yogic willpower have brought him to the top.
In “A Little Book of India: Celebrating 75 Years of Independence”, Bond draws on his own memories and impressions to pay homage to the country that has been his home for 84 years.

“We have had many outstanding prime ministers – Nehru, Shastri, Indira Gandhi, A B Vajpayee, Manmohan Singh, many others – and now Narendra Modi, a man of humble beginnings, whose political acumen, natural sagacity, and yogic willpower have brought him to the top and kept him there through two general elections,” he writes.

Bond, who was a schoolboy when India won independence, recalls how the tricolour was hoisted and the Union Jack came down at his boarding school in Shimla.

He also talks about Nehru’s iconic speech saying it was a “reflection of his knowledge of world affairs and his familiarity with the English language”.

Nehru, for Bond, was a “dapper individual, almost always to be seen with a red rose in his buttonhole. He had been to an English public school and University and spoke and wrote fluently in English. He was a westernised Indian, but also a man of the people. He loved the crowds and addressed with them enthusiasm”.

Bond also says that Nehru was impatient of security and frequently gave a slip to his bodyguards.

“One of them, an ex-bodyguard, who met me around 1960, said: ‘I had a hard time keeping up with him. He kept darting off in unexpected directions. I lost weight running after Pandit Nehru’. When I met this gentleman, he was putting on weight, relieved at having passed on his duties to another bodyguard,” he writes in the book, published by Penguin Random House India.

According to Bond, the Nehru years were, by and large, peaceful and placid years with India beginning to make its influence felt in the international arena as a champion of non-alignment.

“We were on good terms with both Russia and the US and China was looked upon as a special friend.”

Bond calls Nehru a man of many gifts and achievements, and his literary works – “An Autobiography” and “Discovery of India” remain with us as monuments to his achievements.

He describes Indira Gandhi as a strong leader who had no hesitation in sending the Indian Army into East Pakistan and helping to bring about the creation of Bangladesh.

“But her premiership was marked by many upheavals – an Emergency of almost two years duration, during which most of her political opponents were imprisoned, along with outspoken critics,” Bond writes.

On Rajiv Gandhi, he says though he “did not have a political background, but he did his best, with the aid of his well-wishers and his supportive wife – until he too fell to an assassin’s suicide bomb, the tragic outcome of his efforts to bring about a solution to the civil war in Sri Lanka”.

Atal Bihari Vajpayee, according to Bond, was a modest and thoughtful man and the BJP’s man of the moment.

“A few years before he had become prime minister, I had seen him walking down Mussoorie’s Landour bazaar, accompanied by just one or two companions, chatting to shopkeepers and others without any pretensions or desire for show.

“When the BJP came to power, that same modesty, courtesy, and air of deliberation, made him a prime minister very different from his predecessors; a man who could, in many ways, identify with the aspirations of the people,” he writes.

In the book, Bond also talks about the diverse elements of India – its rivers and forests, literature and culture, sights, sounds and colours.

“This little book does not claim to be a political or historical analysis of events, although I have dwelt on the highlights of the last 75 years of India’s progress to maturity as a nation,” he says.