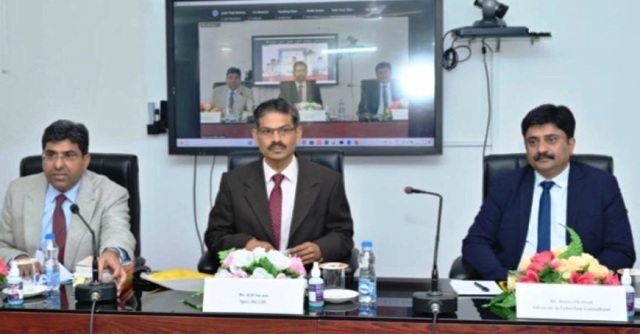 He said that there is a pressing need to bring all the stakeholders on one platform to set a standardized process in dispensing justice in its true form.

The one day workshop was organised on ‘What are digital fingerprints and how to appreciate its relevance?’ at Judicial Academy, Jammu. Swain apprised the participating officers about the clarion call of dealing with digital evidence which has far reaching consequences.

Director, J&K Judicial Academy, Shahzad Azeem, gave an overview of the programme. He stated that the purpose of today’s workshop is to keep abreast all the functionaries, responsible for Criminal Justice System and having duty to maintain law and order in society, with the modern day challenges in the arena of digital world as the digital forensic field matures; advances need to be made in how forensics capabilities are specified, implemented and verified.

He said that when it comes to Cybercrime it depends in understanding the Cyber law and digital evidence, thus necessity has been felt to know the standard procedure and protocols being followed by all the stakeholders from investigation till culmination in the courts of law.

In the technical sessions, the technical team of CID dealt with the concept of digital footprints and discussed different aspects of mobile, laptop, internet and social media
Which form the ecosystem of any digital evidence. They described the working of internet and various stakeholders in internet communication system and discussed the roles and responsibilities of internet users, TSP/IP and social media intermediary. They also highlighted the challenges faced by LEA during investigation such as VoIP calls, geolocation of intermediary servers, virtual private networks (VPN), virtual calls etc. They deliberated on the concept of imaging, digital evidence extraction from the devices and hash values.

Nisheeth Dixit, Advocate and cyber law consultant, resource person in the technical session, discussed the relevancy and admissibility of digital evidences. He also emphasised on various case laws and judgments in the field of digital evidence.

Later, an interactive session was held during which the participants deliberated and discussed various aspects of the subject topic and raised queries which were satisfactorily settled by the resource persons.