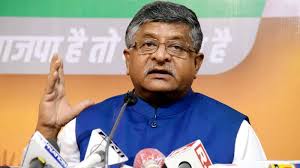 Showcasing the central government’s achievements in digital connectivity, Electronics and Information Technology Minister Ravi Shankar Prasad on Friday said that nearly 46,000 villages in Bihar will be connected with optical fibre network in next 6-7 months.
Addressing a press conference, Prasad said that primary schools, Anganwadi centres and ASHA workers will also get free connectivity for one year.

“The Prime Minister had announced that 6 lakh villages will be connected to the optical fibre network in one year. Optical fibre will come in 45,945 villages of Bihar in 6-7 months. This network is already there in all gram panchayats. Now, we will take it to the villages. This work will be done by our youth at Common Service Centres. The survey has already been completed in 27,012 villages and the rest will be completed by November. 6,000 optical fibres have already reached villages,” he said.
“There will be a Wi-Fi spot in every village which will be free for one year. Primary schools, Anganwadi centres and ASHA workers will also receive it for free for a year. People can take the connection at a nominal rate,” he added.

Stressing on BJP’s manifesto for Bihar polls, Prasad said: “Some only do promises to woo people, some take resolve to work and implement it on the ground. We have come with a roadmap.”
Prasad said that 21.44 lakh people have been made digitally literate in Bihar.
“In the last 5.5 years, Rs 11 lakh crores in bank accounts of poor directly and Rs 1.70 lakh crores payment saved from by middlemen,” he added.

“There were around 6,000 Common services centres (CSC) in Bihar in 2014 but now there are 34,611 CSCs,” he added.
He said that the number of mobile towers has doubled in Bihar in comparison to 2014.
Voting concluded on 71 constituencies spread across 16 districts in the first phase of Bihar Assembly elections on Wednesday. Polling for the second phase to take place on November 3 and for the third phase on November 7.
The results will be declared followed by counting of votes on November 10.