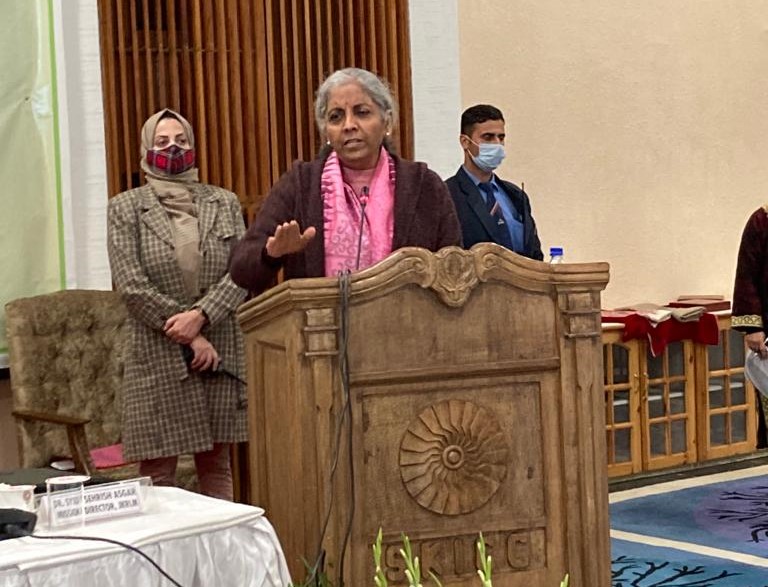 SRINAGAR: National Conference (NC) on Thursday denounced the claims of Union Finance Minister Nirmala Sitaraman on “changed ground situation” in Jammu and Kashmir as a bundle of lies to whitewash the devastating impact, August 5, 2019 decisions of the Union Government have had on the people and economy of Jammu and Kashmir.

This was stated by the Party Members of the Parliament Muhammad Akbar Lone and Hasnain Masoodi while lambasting the claims of Union Finance Minister asking her which yardstick she had employed to gauge the development and growth parameters in Jammu and Kashmir.

According to a statement, the MPs stated that the Union Finance Minister gloating on the Kashmir situation is a bundle of lies which is belied by the prevailing ground situation in Kashmir.

They said the Ministers in the incumbent dispensation at the helm of affairs in New Delhi have been outlandishly lying to white wash the devastating outcome of its August 5, 2019 unilateral and undemocratic decisions.

Denouncing the absurd chicanery of the Union Minister, Party MPs said if the situation was that good then why has the footprint of forces increased in Kashmir? “Why have bunkers, night raids, civilian killings returned to haunt people? How has the unemployment ratio skyrocketed to an all-time high of 21.6 percent, which is thrice the national average? Why are people associated with manufacturing, horticulture, tourism and trade in the throes of a profound crisis? What yardstick has the concerned minister employed to gauge the development in Jammu and Kashmir?” they said.

“Such claims are akin to running salt into the wounds of the people of J&K, who are being denied democracy and not trusted with a popular government; whose democratic rights have been crippled; whose exclusive rights over the land, jobs and natural resources stand liquidated,” they added.

The MPs stated that the decisions of August 5 2019 have plunged J&K into an deep chasm of political uncertainty, and insecurity, dissolving the multitude of dividends encashed by previous democratically elected successive state and central governments in terms of improving security, infusing confidence in youth, generating employment, perking up development.

A simple fact check, the MPs said will reveal how badly Jammu and Kashmir is doing on all developmental indices. The major causality of the abrogation of Articles 370, 35 A has been the freedom of press in Jammu and Kashmir. By denying the press it’s due freedom, the government is only peddling it lies to white wash the aftermath of the Himalayan blunder it committed on August 5, 2019. “The new “media policy 2020″ has taken away the basic principle of a free press and systematically stifled all forms of dissent,” they said.

Cautioning the Central government against misconstruing the situation in Jammu and Kashmir, the MPs demanded the rollback of August, 5 2019 decisions—(KNO)