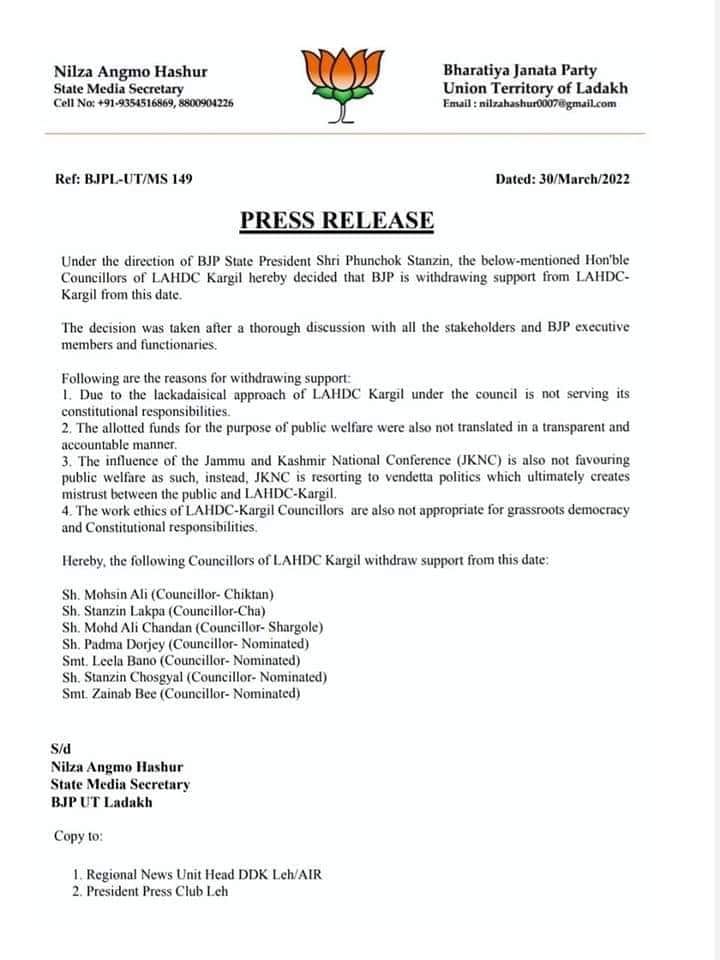 Jammu: In a major political development, six Councillors of the BJP on Wednesday withdrew its support from National Conference-led LAHDC (Ladakh Autonomous Hill Development Council) Kargil for “failing to serve its constitutional responsibilities and resorting to vendetta politics”.

One of the BJP Councillors is yet to decide on withdrawing support from Feroz Ahmed Khan-led NC Council. The fall of three-year-old NC-BJP alliance in Kargil also casts shadow over the very survival of the Council which is going to polls next year.

Immediately after the decision, six out of seven Saffron Party Councillors sent a letter to the Deputy Commissioner Kargil, who is the Chief Executive Officer (CEO) LAHDC Kargil, seeking dissolution of present Council without any delay. Mohsin Ali, Councillor Chiktan has not signed the letter and he is yet to take a call on the decision.

The 2018 elections to the Kargil Hill Council had produced a hung verdict. In the 30-member Council at present, there are 26 elected members of the LAHDC comprising 10 from the NC, eight from Congress, three from the BJP and five (Independents). Four nominated Councilors belong to the BJP.

The NC initially had an alliance with the Congress but it fell out after the 2019 Lok Sabha polls. Thereafter, the NC entered into a coalition with two PDP councillors and four Independents to continue in power in the Council. A few months later, both PDP councillors joined the BJP, which extended support to the NC.

Despite having strong ideological differences, the BJP while stitching an alliance with NC had said, “The coalition is based on BJP’s focus on the development of Kargil, welfare of its people and to ensure that the council completes its full term of five years so that people are not forced into mid-term elections.”

In the current scenario, NC having 10 members needs the support of 16 councillors to stay in power. Four independents are supporting the NC while another independent and former CEC Kargil Kacho Ahmed Ali Khan’s vote will be crucial for the survival of the NC-led Council.

The BJP has cited four major reasons for withdrawing its support from the NC-led Council which is going to complete its five-year term next year.

“On the direction of BJP State President (Ladakh) Phunchok Stanzin, the decision was taken after a thorough discussion with all the stakeholders and BJP executive members and functionaries. The reasons for withdrawing support include ‘due to the lackadaisical approach of LAHDC Kargil under the council is not serving its constitutional responsibilities’, the allotted funds for the purpose of public welfare were also not translated in a transparent and accountable manner, the influence of the Jammu and Kashmir National Conference (JKNC) is also not favouring public welfare as such, instead, NC is resorting to vendetta politics which ultimately creates mistrust between the public and LAHDC-Kargil and the work ethics of LAHDC-Kargil Councillors are also not appropriate for grassroots democracy and Constitutional responsibilities,” BJP Media Secretary Ladakh, Nilza Angmo Hashur, who also issued a press statement said.

Nasir Hussain Munshi, Congress president Kargil told The News Now said that they have received no correspondence or request from NC for support. “The Council is going to polls next year and it is also a very sensitive matter. If we receive any request from NC, we will hold threadbare discussions on the subject with all stakeholders of the party and decide accordingly,” he said.

The CEC Kargil Feroz Ahmed Khan did not respond to repeated phone calls.