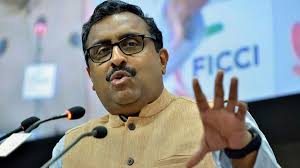 Mr Madhav has hold meetings with senior BJP leaders, who are demanding restoration of Statehoold before holding of elections in the Union Territory (UT).

Mian Altaf in a statement clarified that he has refused to meet Mr Madhav on Friday.

Gujjar leader said a local leader of BJP Khalid Jehangir on Friday called him and informed that BJP Ram Madhav will come to his residence to meet him.

However, he said, “I told him (Khalid Jehangir) that there is no need to come to my residence as I have nothing to do with the BJP. I never met him directly or indirectly and to keep the record straight I sent a message from my phone to Khalid Jehangir to immediately convey to Ram Madhav not to visit my residence besides never discuss any politics with me.”

Former minister further said “I want to convey it to my people, besides those who had advised Mr. Ram Madhav, that may be from the government side or BJP or any other side and want to stage any drama and then harm me and blame militants. People understand these things”.

Meanwhile, BJP leaders have rejected the Gupkar Declaration, which seeks restoration of August 4, 2019 position. They said leaders and parties who supported the Gupkar declaration was nothing just a day dreaming which will never come true.

On August 5, 2019 centre abrogated Article 370 and 35 A besides divided the state into two Union Territories (UTs) besides arrested all mainstream leaders, including three former Chief Ministers—Dr Farooq Abdullah his son Omar Abdullah and Peoples Democratic Party (PDP) president Mehbooba Mufti. However, barring Mehbooba, who has been booked under Public Safety Act (PSA) other leaders have been released.

Dr Abdullah has recently alleged that Mehbooba was not being released to break the PDP.