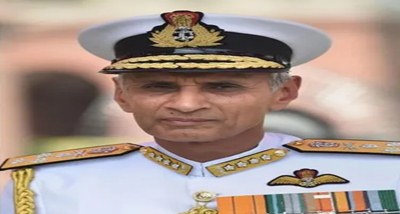 Indian Navy Chief Admiral Karambir Singh has said that the Navy is prepared to handle the dual challenge of both COVID-19 and Chinese attempts to change the Line of Actual Control (LAC). Addressing a press conference today, Admiral Singh said the Navy’s activities are in close coordination and synergy with the Indian Army and Indian Air Force. He informed that three Chinese warships are in the Indian Ocean region which he said have been there since 2008 for anti-piracy patrols.

Admiral Singh asserted that the Navy has an SOP in place to tackle situation in case of an infringement by the Chinese research vessels. He said, 2 predator drones taken on lease are helping India to fulfil the capability gap in terms of surveillance. He said the Navy has deployed P-8I aircraft at various locations on the requirement of Army and Indian Air Force, in addition to the deployment of Heron surveillance drones on the northern borders.

Admiral Singh informed that adding a push to the goal of self-sustainability 41 out of the 43 warships and submarines, including the indigenous Aircraft Carrier, will be built indigenously in the country for the Indian Navy.