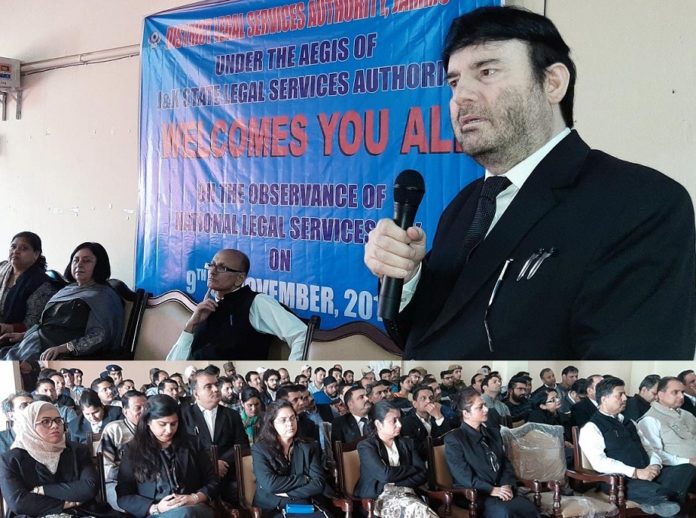 Secretary, District Legal Services Authority, Naushad Ahmed Khan in his inaugural address gave a brief introduction about the aims, objectives and importance of National Legal Services Day and made people aware about the various provisions under the Legal Services Act and Rights of the litigants.

Chairman District Legal Services Authority, R K Wattal, highlighted the important schemes introduced by NALSA for providing Legal Aid and the utility of the Lok Adalats and also highlighted the provisions of Legal Services to weaker sections of the society. He laid emphasis on Legal Literacy and increase Legal Awareness among the masses that live in far off areas. It is a reassurance that opportunities for securing justice are not denied to any citizen by reason of economic or other disability he added.

Bala Jyoti, Registrar Rules High Court of J&K appreciated the efforts of the Para Legal Volunteers and  said that Alternative Dispute Resolution (ADR) is the greater contribution of the Government for resolving different kinds of disputes and Lok Adalats are organized across the country to make safe the legal system operations and encourages righteousness of people on equality basis.

Kikar Singh Parihar, Presiding Officer MACT, Jammu, Tahir Khursheed Raina, Addl. District & Sessions Judge, Jammu explained different Acts  and emphasized on the urgency of striving for reducing the gap between rich and poor litigants for a fair justice delivery and asserted that all the Legal disputes pending in Courts, can be taken to Lok Adalats for amicable settlement.