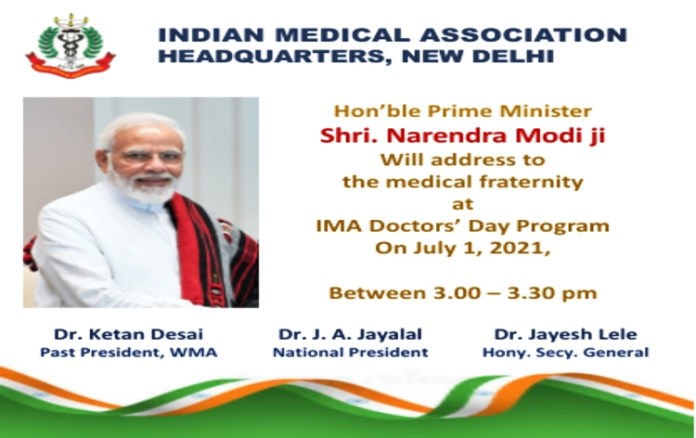 National Doctors’ Day is being celebrated today. This day is observed on the 1st of July every year to acknowledge the role of doctors in keepin the nation healthy. Government established Doctors’ Day in 1991 to recognize the contributions of former Bengal Chief Minister Dr BC Roy. He played an important role in the establishment of Medical Council of India and Indian Medical Association. He was also conferred with  Bharat Ratna on 4th February, 1961.

In his ‘Mann ki Baat’ address last Sunday, Prime Minister Narendra Modi spoke about the contributions made by doctors and corona warriors during the Coronavirus pandemic. He said it is everyone’s duty to thank doctors with an equal measure of affection and encourage them.

Prime Minister Modi will address the doctors community at a programme organised by Indian Medical Association this afternoon.  In a tweet, the Prime Minister said India is proud of the efforts of all doctors in fighting COVID-19.

President Ram Nath Kovind and Vice President M Venkaiah Naidu have sent their greetings on National Doctors’ Day. The President in a tweet said that day should be celebrated as a tribute to dedication of doctors to treat the ill to the best of their ability. Mr Kovind said that in Covid-19 times, their service has gone beyond the call of duty. He said, the country is deeply indebted to these selfless angels who have risked their lives to save ours.

Vice President M Venkaiah Naidu has saluted all members of the medical fraternity for rendering selfless service and working round-the-clock to save others’ lives by risking their own. In a tweet, Mr Naidu said that the pandemic has put tremendous stress on country’s doctors and their families.

Prime Minister Narendra Modi has extended his greetings to all the doctors on the occasion of Doctors’ Day. In a tweet, Mr Modi said that India’s strides in the world of medicine are commendable and have contributed to making our planet healthier. He also posted a video on his Twitter handle about National Doctors’ Day on which he had shared his thought in Mann Ki Baat programme last Sunday.

On the occasion of National Doctors’ Day, Information and Broadcasting Minister Prakash Javadekar has saluted the doctors and all other healthcare workers who fought against the pandemic and saved the nation.