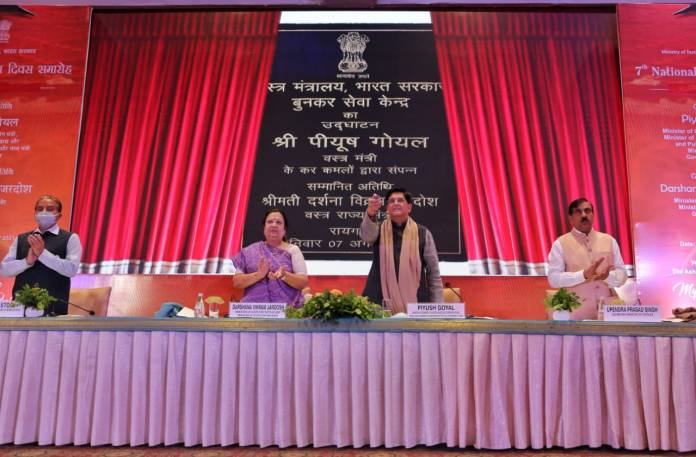 Textile Minister Piyush Goyal has stressed on increasing the production capacities and to focus on export of handloom items in the next three years.

He said the handloom industry has flourished significantly in the last seven years and steps must be taken to enhance and promote the handloom sector in the country.

While addressing an event organized to celebrate the 7th National Handloom Day, in New Delhi today Mr. Goyal said, concrete steps need to be taken to increase the production capacities of handloom sector from existing 60 thousand crore rupees to over one lakh 25 thousand crore rupees within three years.

Appreciating the role of National Handloom Day and My Handloom, My Pride initiatives, the Minister said, handloom sector has played important role in promoting the indigenous textile sector and new marketing strategies must be adopted to double the production of handloom.

Referring to the Swadeshi Movement, he said, handloom is closely linked with history and it has flourished since 1905.

He said, India will celebrate 75th years of Independence in the next year and handloom will play an important role in the development of self-reliant India.

Minister of State for Textiles, Darshana Jardosh said, it is the responsibility to promote local artisans under the local for vocal initiative.

She said, women play an important role in the handloom sector and steps must be taken to increase their participation.