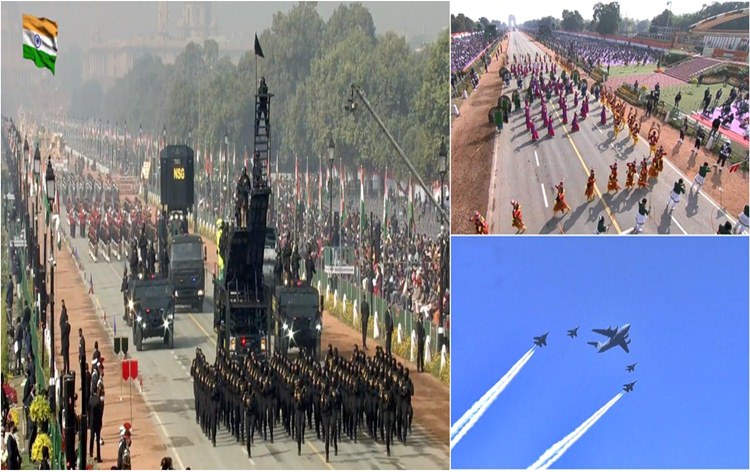 Nation is celebrating  its 72nd Republic Day today. The main function was held at Rajpath in the National Capital where President Ram Nath Kovind took the salute of the parade.

India’s military might, cultural diversity, social and economic progress were  on display during the   Republic Day celebrations at the majestic Rajpath. Thirty-two tableaux, 17 from States and Union Territories, nine from various Ministries or Departments and Paramilitary Forces and six from the Ministry of Defence were rolled down the Rajpath. Some of the highlights of the tableaux were Vision For Carbon neutral Ladakh, Sun Temple of Modhera, Gujarat, Tea-tribes of Assam, Splendorous Sounds of Chhattisgarh’s Folk Music, Coir of Kerala, Digital Bharat, Four Labour Codes, Aatmanirbhar Bharat Abhiyan, New India: ‘Vocal for Local’, CRPF and BRO. School children  performed Bajasal Dance of Odisha, Tamil Nadu Folk Dance, and theme dances on Hum Fit Toh India Fit and Aatmanirbhar Bharat.

Rafale fighter jets, which were inducted into the Indian Air Force (IAF) last year, featured in the Republic Day parade and culminated the flypast by carrying out the ‘Vertical Charlie’ formation.

A Rafale jet with two Jaguar Deep penetration strike aircraft and two MiG-29 Air Superiority Fighters conducted the “Eklavya” formation at a height of 300 m and a speed of 780 km/h. The parade culminated with a single Rafale aircraft flying at a speed of 900km/hr carrying out a ‘Vertical Charlie’.

Five Rafale fighter planes were formally inducted into the IAF in September last year. A total of 38 Indian Air Force (IAF) aircraft participated in the flypast this year. The ‘Trinetra’ formation comprising three Su-30MKIs – the three aircraft split outwards and upwards, forming a ‘Trishul in the Sky’ enthralled the audience.

A 122-member proud contingent of the Bangladesh armed forces also marched on Rajpath.

This morning, the Republic Day Parade ceremony started with Prime Minister Narendra Modi visiting the National War Memorial where  he led the nation in paying solemn tributes to the fallen heroes by laying a wreath.

The National Flag was unfurled followed by the National Anthem with a booming 21-gun salute. The parade  commenced with President Ram Nath Kovind taking the salute.

This time due to the COVID-19 pandemic, the parade route has been shortened. The parade started from Vijay Chowk, as usual, but  culminated at the National Stadium instead of ending at the Red Fort. Only around 25 thousand spectators were allowed to witness the parade as compared to the average of 1.15 lakh people every year. Children below 15 years and the elderly with co-morbidities were not permitted. This year, there was no Chief Guest from Foreign country due to the pandemic. The event was held following all necessary Covid -19 preventive protocols.