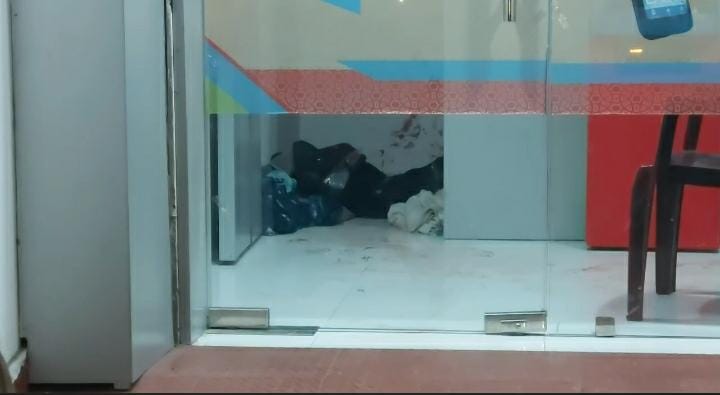 JAMMU: A swift investigation by Jammu Police has revealed that the last night’s sensational murder of a bank guard was executed by two Bandipore youth.

Raju Sharma, son of Gullu Ram hailing from New Plot area of Jammu, was found dead inside guard chamber of the bank ATM at sector 13 in Nanak Nagar at around 10 pm last night.

SSP said that the Lone duo had gone to the ATM with purpose of looting cash. On being resisted by the guard, they attacked him inside the rest room by initially smothering his face with a blanket. He said Kaif and Waqas had recently taken a place on rent in Nanak Nagar area where they lived as paying guests. He said that the accused have been taken into custody and further investigation is on.

Earlier, family members and neighbours of a bank ATM guard, who was allegedly murdered in Nanak Nagar area of Jammu Thursday night held a protest demonstration this morning, demanding arrest of his ‘killers’ and financial aid to the victim’s family.

He was found dead in a pool of blood by locals, who informed police about the incident.

Police said that prima facie, it seems a case of murder.

Scores of residents of New Plot area of Jammu including family members and relatives of the slain ATM guard Friday morning held a protest demonstration, demanding culprits be brought to book.

According to witnesses the protesters blocked the New Plot road and demanded a fair and speedy investigation into the matter so that murderers are put behind the bars.

They said that the victim was the lone brother of seven sisters and the only bread earner in his family including aged and ailing parents.

He is survived by his wife and two children.

The protesters said that the slain had sacrificed his life urging the government to honor his bravery and provide financial aid to his family. They demanded a job in the bank to one of his family members.

An official said that police have already registered a case in the local police station and investigation is going on.

This novel portrays a charming tale of a young schoolboy trying to find his place in a changing world
“Nomad’s Land”: This book talks about the effects of terrorism and displacement, and about the healing powers of hope, friendship and reconciliation
Comment