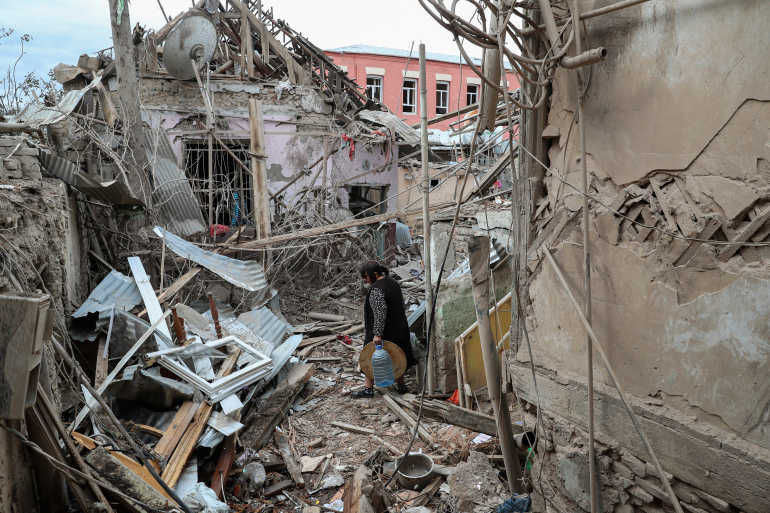 Nagorno-Karabakh is at the heart of a decades-old conflict between Azerbaijan and Armenia. In 2020, the conflict witnessed a flare-up of heavy fighting, causalities and a ceasefire that sought to ease the situation in the disputed enclave.

Conflict in 2020
On 27 September, Armenia and Azerbaijan report dozens of casualties, both military and civilian, after fighting erupted following months of increased tensions, beginning the worst fighting to hit the region since the 1990s. Media reports claimed Azerbaijani tanks, helicopters and drones engaging Armenian troops in several key strategic locations along the 200-km frontline, following which Armenia and the de facto Nagorno-Karabakh leadership sent tanks and armoured fighting vehicles to the front and mobilised reserve troops. Armenia said Azerbaijan fired the first shots. Azerbaijan said it was launching a “counter-offensive” in response to Armenian aggression.

For more than six weeks, fighting and displacement continued in Nagorno-Karabakh and the surrounding areas. In early November, the turning point was the capture of a much-coveted strategic town by the Azerbaijani army known as Shusha to Azerbaijanis and Shushi to Armenians; this was a massive blow to Armenians not only locally but also within Armenia and worldwide.

On 9 November, Armenia, Azerbaijan and Russia signed a nine-point- ceasefire agreement to end the six weeks of intense fighting. Under the agreement, Russian peacekeepers were deployed along the front line in Nagorno-Karabakh and the corridor between the region and Armenia. Further, it has been agreed that Azerbaijan will continue to hold on to Nagorno-Karabakh areas that it has taken during the conflict. In contrast, Armenia agreed to withdraw from several other adjacent areas in the next few weeks.

The peace deal sparked celebrations in Azerbaijan while protests erupted in Armenia, where demonstrators briefly occupied government buildings, expressing anger at the agreement and calling into question whether the government that negotiated the deal could remain in power to enforce it. Further, Armenian Prime Minister Nikol described the deal as “incredibly painful both for me and both for our people.” At the same time, Azeri President Ilham Aliyev celebrated, tweeting: “This is a historic day, an end is being put to the Armenia-Azerbaijan Nagorno-Karabakh conflict.”

Issues in the background
An old conflict but this time was different
Nagorno-Karabakh had long been ripe for renewed local conflict with the 1994 ceasefire, meant to be temporary. However, unlike the previous clashes, Ankara expressed complete support with Baku. Along with this support Azerbaijan used sophisticated attack drones and long-range rocket artillery coupled with a newly adopted war strategy where instead of a traditional blitzkrieg, its forces bank on intensive and accurate artillery strikes targeting Armenian fortified defence lines, a manifestation of the degree to which Azerbaijan perceives NATO-member Turkey as its role model for building a modern, mobile and more effective military. However, on both sides, it was this presence of this new generation, hi-tech weaponry sharply increased the destructive potential of the violence.

A local fight drew in regional powers
Two outside powers that decisively shaped this conflict in 2020 are Russia and Turkey.

Turkey’s direct engagement in support of its ethnic Turkic ally, Azerbaijan, in an area of traditional Russian influence, turned the local dispute into a regional one. Further, Turkey’s engagement in the region also suggests an era of deals between regional strongmen is returning, with Europe and the United States on the margins.

On the other hand, while Russia who already has a military base in Armenia and shares economic ties had no forces in Azerbaijan until now. The introduction of Russian peacekeepers to enforce the new map enhances the Kremlin’s leverage in the region. Further, Russia could use the peacekeeping mission into a permanent military deployment in both countries. However, their mission may prove difficult and entangle Russia in the bitterness of an intractable conflict.

An uneasy peace after the Russian-brokered deal
After the signing of the tripartite ceasefire which called for Armenia’s army to withdraw from Nagorno-Karabakh and be replaced by Russian peacekeepers, an uneasy peace was created on one side. The deal appeared to be in favour of Azerbaijan, delivering much of what the country has sought for years in negotiations. On the other hand, Armenia had to withdraw its army from the enclave as well as open a transport corridor linking Karabakh to Armenia proper, the 10-mile-long Lachin corridor, in return for a 30-mile-long corridor through Armenia linking Azerbaijan to the Azeri enclave of Nakhichevan bordering Turkey.

The deal also left Armenia deeply reliant on Russia for security, potentially weakening Armenia’s independence as the deal made no mention about the territory’s long-term status and ethnic Armenians who returned to their homes in buses overseen by Russian peacekeepers stating they could not imagine living in the region without Russia’s protection.

Further this, the lopsided deal leaves uncertainty over parts of Nagorno-Karabakh administered by local ethnic Armenian authorities. Apart from regaining territory it lost in a 1990s war with Armenia, Azerbaijan seems to have taken off the table questions of a referendum to decide the future of Nagorno-Karabakh been a feature of peace talks over the past two decades. Thus, as the Azeri’s celebrate the deal as a victory, the Armenian see it as a defeat. Hence, the deal does not necessarily bring an end to the six-week conflict but is changing the region’s status quo.

Perspectives in 2021
Unresolved issues: Transferred areas, IDPs and humanitarian access
The agreement reach remains silent on numerous issues from Karabakh’s future status and how a final settlement of the conflict would be reached. Following are some of the issues that remain in question; in turn, these loose ties would result in the possible flare-up of the conflict once again. First, the timing and the number of Internally Displaced Persons (IDPs) who will start returning to the transferred areas remain unclear.

Second, the status of ethnic Armenians in transferred territories remains unclear. Those ethnic Armenians who have chosen to remain are likely to face potential discrimination or face legal concerns about their status under Azeri law (as ‘illegal settlers’).

Third, it is likely that issues about how accessible the newly transferred areas will be for humanitarian and development organisations. Given that the human cost and civilian suffering on both sides have been tragic, it is expected that humanitarian and development aid agencies and organisations will be forced to navigate a highly politicised environment both in transferred territories and in Nagorno-Karabakh.

The cost of a questionable ceasefire
The Russian brokered ceasefire may have offered the kind of opportunity the region could not witness since the collapse of the Soviet Union and the conclusion of Karabakh’s initial war in 1994, however it has serious weaknesses.

Will the ceasefire hold up remains a question to be answered, given that there have already been violations. It is unclear what the status of Nagorno-Karabakh will be, how the implementation of the ceasefire agreement will work, and what role the peacekeepers will have. Much would depend on how the geopolitics pan out with Turkey and Russia, both who are likely to reassert their influence and role in the region.

Nagorno-Karabakh will now be partitioned
The nine-point ceasefire provides a template for a newly partitioned Nagorno-Karabakh, largely along the lines of Azerbaijan’s vision. However, the Armenian who before the war held an expansive vision of the territory became an unpleasant new reality. Further, whether ceasefire lines become a hard or soft partitioning of space remains unclear; however, the new transportation corridors designed to separate Shushi from neighbouring Stepanakert suggest hard borders will be established in sensitive locations.

In Armenia, protests will likely continue in reaction to Pashinyan’s signing of an agreement, in this regard, Armenian authorities are likely to maintain a very high-security posture near potential protest sites as clashes are possible between demonstrators and security personnel.

Project Assistant at School of Conflict and Security Studies at the National Institute of Advanced Studies (NIAS), Bangalore. As part of her research focus, she looks into gender, minorities and ethnic movements in Pakistan and peace processes in South Asia.

Hot on the Conflict Trails: Top Ten Conflicts in 2020
Thailand: For the pro-democracy protests, it is a long march ahead
Comment