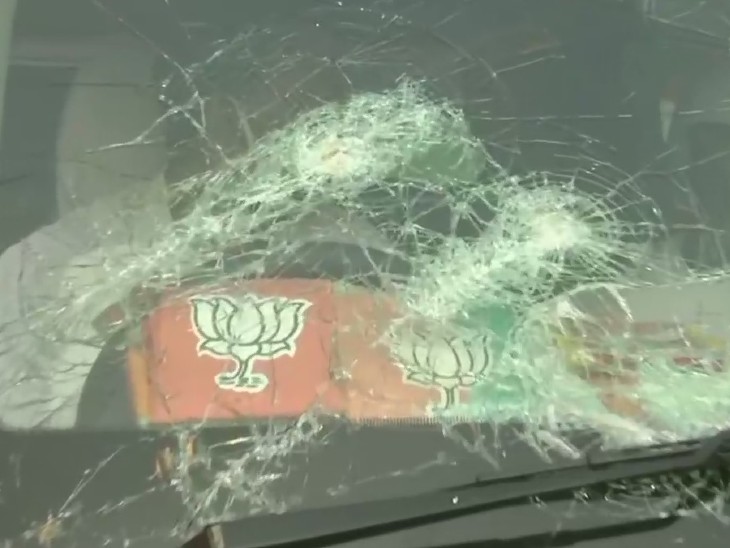 “Mukul Roy and Kailash Vijayvargiya were injured in the attack today. It is a shame on democracy,” Nadda said.

“There isn’t a car in our convoy which was not attacked. I am safe because I was travelling in a bulletproof car. This state of lawlessness and intolerance in West Bengal has to end,” Nadda said while speaking at a public meeting at South 24 Paraganas in WestBengal

BJP leader Kailash Vijayvargiya was on his way to South 24 Paraganas and alleged that Trinamool Congress (TMC) workers pelted stones at his vehicle at West Bengal’s Diamond Harbour.

The incident took place while he was on his way to South 24 Paraganas. Protestors also attempted to block the road from where BJP President JP Nadda’s convoy was passing.

“Bengal Police has already got the information about BJP National President JP Nadda ji program. But once again the Bengal police failed. In front of the police near Siracol bus stand, TMC goons hit our workers and pelted stones at my car,” Vijayvargiya tweeted.

BJP leader Sambit Patra also alleged that he along with some other leaders were attacked while they were travelling in a car.

“Our cars attacked in Bengal!! Window panes were broken. Shri Shivprakash ji, Shri Sanjay Mayukh ji and myself were travelling in this car. One karyakarta in our car is bleeding!! God save our lives!! Mamata Banerjee, is this democracy??” Patra tweeted.

West Bengal Governor Jagdeep Dhankhar said that he is concerned at alarming reports of anarchy and lawlessness.

“Mamata Banerjee indicating ruling party harmads on rampage at BJP president convoy & political police WB Police in support…I share my shame with you as it’s on account of your acts of omission & commission,” Governor tweeted.