Home Newsfeed My name is not ‘Rahul Savarkar’, will never apologise for truth: Rahul... 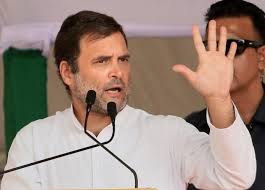 Congress leader Rahul Gandhi on Saturday reiterated his stand and said that he will not apologise for “rape in India” remark.
“I was told by the BJP in Parliament yesterday, ‘Rahul ji, you gave a speech. Apologise for that.’ I was told to apologise for something which is right. My name is not Rahul Savarkar. My name is Rahul Gandhi. I will never apologise for truth,” Gandhi said at the party’s ‘Bharat Bachao’ rally here. On Friday, the Congress leader refused to apologise for his remark and said that the issue is being raised by the BJP to deflect the attention of the people from protests in North-East over Citizen Amendment Act.
“I will not apologise… I have a clip in my phone in which Narendra Modi ji is calling Delhi a ‘rape capital’, will tweet it so that everyone can see. The main issue is Narendra Modi and Amit Shah set northeast on fire. Just to deflect attention from protests in North East, this is being made an issue by BJP,” Gandhi had said.
He had also said that the incidents of rape were being reported from different parts of India as the incidents were happening everywhere.
“I had said that Narendra Modi had said there will be ‘Make in India’. We thought there will be ‘Make in India’ in newspapers but we look at newspapers today and see ‘rape in India’. Rape incidents are happening everywhere”, he added.
“In Unnao, BJP MLA raped a woman. The accident of the victim was orchestrated. Narendra Modi did not say anything. Modi spread violence and now it is everywhere in the country,” he said.
Both houses of Parliament on Friday witnessed uproar as BJP members demanded an apology from the former Congress president.
Union Minister Smriti Irani has also approached the Election Commission of India (ECI) seeking strong action against Gandhi for allegedly using crimes against women as a political tool.
Addressing a poll rally in Jharkhand on Thursday, Gandhi had said Prime Minister Narendra Modi had launched ‘Make in India’ but nowadays it is ‘Rape in India’.
“Narendra Modi had said ‘Make in India’ but nowadays wherever you look, it is ‘Rape in India’. In Uttar Pradesh Narendra Modi’s MLA raped a woman, then she met with an accident but Narendra Modi did not utter a word,” he had said.