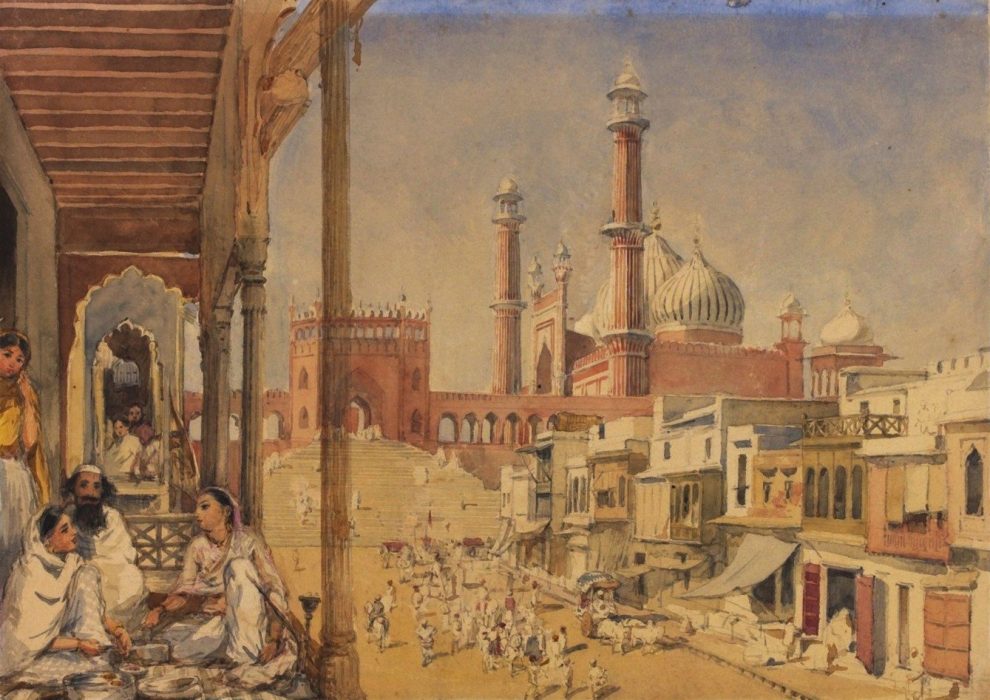 Mirza realized he was babbling, but the news had hit his ears like a ringing slap. A murder at the mushaira? That was a first. Who had been killed? This was his community, his people. They affected a frigid competitiveness when around each other, but it was at moments such as these he realized how close he was to the small coterie that was Delhi’s society of eminent poets. ‘For the love of Allah, out with it! Who was murdered?’

‘One Janaab Sukhan Khairabadi was stabbed to death last night. He is a local nobleman and poet, maybe you know him. The cleaner found his body around the time of the Fajr prayer.’

Mirza was ashamed of the relief that coursed through his body. He had never liked Khairabadi, who was an oily sycophant who went about kissing any behind he found powerful. A nawab here, a British bureaucrat there. And to add the ultimate insult, he was a poor poet. Better him than any of the others…but he realized that this was an inappropriate reaction.

‘Inna lillahe wa inna ilaihe rajeoon.’ Verily, we come from God and to God we must return. He intoned the Quranic verse of condolence perfunctorily. ‘I am sorry to hear that, young man. It is quite a shock. But I presume you came over in such a tearing hurry for a reason other than breaking this sad news to us?’

Kirorimal was not fair-skinned, but his face reddened a little with nervousness. ‘Ghalib uncle, I need your help in solving this case.’

‘Me?’ Mirza’s laugh was a bit inappropriate, but the request had astounded him. ‘Beta, this is a murder case and I am but a poet….’

‘Ghalib uncle will help you.’ Umrao’s voice was steely and decisive. ‘I have no idea whether he will be able to help you with this case. He is sixty years old and has no skills with anything except words, but you are Lala-ji’s nephew, and he never asked any questions when we came to him.’

Mirza could not help but smile. ‘I have no skills with anything except words, just like she said.’

‘You know what I mean.’ Umrao was defensive but began to smile herself. ‘All I am saying is that we will be faithful to Lala-ji. Hal jaza-il ehsaan, illal ehsaan. There is no recompense for a kindness, save another kindness. It says so in the Quran!’

Kirorimal perked up. ‘I almost forgot, aunty.’ His relationship with Umrao had already become quite free. ‘My uncle sent this. It is only fifty rupees, but he said you may need some money for Eid provisions.’

‘No, beta.’ Umrao’s voice was soft, but as firm as it had been earlier. ‘Tell Lala-ji that the next exchange of money between us will come from us to him. He has been far too kind, actually.’ She arched her eyebrows warningly at Mirza, who looked like he was about to remonstrate. ‘Now what did you want from Ghalib uncle?’

‘Aunty, the past few hours have been very scary.’ Mirza was faintly amused that the request to him had morphed into a conversation with Umrao but listened anyway. ‘It has been only a few days since I was appointed Naib-Kotwal of Chandni Chowk. It is a temporary post, my predecessor died suddenly, and they had put me in while they searched for someone more suitable, more…ahem…Urdu for this neighbourhood. The area is quite safe, not much crime, and I had settled down peacefully. But suddenly this morning, Nawab Iftikhar’s servant Kallu woke me up with news of the murder. I rushed there as fast as I could, but when I got there, I was surprised to see the haveli swarming with the Company forces who had seemingly ridden there from Mehrauli at extremely short notice! Not only were there many Indian soldiers present whose rank exceeded mine, but I also counted at least five Angrez soldiers. Not just minor functionaries, aunty, but some really important people. There was Captain William Hodson, a man who is known to execute people on a whim, without trial. Also, one Metcalfe. He is a young man, but someone said he is one of the most powerful men in the Angrez administration.’

Kirorimal’s voice began to tear up as he spoke to Umrao, gazing with filial earnestness. ‘Why such a big posse was present at the haveli is a complete mystery to me, but their presence caused such tension, that everybody was on edge.

‘The soldiers beat up the gateman, Ramji, because he was wearing dirty pyjamas—they said it was disrespectful. I think the fear of these high officials was causing them to behave that way. The Subedar-Major took me inside a room and interrogated me so roughly that I wondered if he thought I was a suspect. When I asked him to show a fellow-Indian policeman some respect, he hit me so hard on the side of my head that my turban fell off. I could not see straight for a few minutes. He told me that if I did not solve this crime, I would be sacked. I have no idea what is going on. All I know is that the murder occurred after a mushaira, and many of the poets are to be treated as suspects. I do not know how to deal with poets. I neither understand their language, nor can make any assumptions about them. I am like a deaf man in a music class, being asked to identify raags.

‘I went home in a state of utter confusion. Luckily, my uncle was visiting. Once he heard the story, he asked me to go to Mirza sahib… Ghalib uncle…and ask for help. He said that not only was uncle well acquainted with the milieu of poets, but that he had already helped solve several criminal cases. He thought Ghalib uncle will be able to help me, so….’ His tearful voice trailed off.

Umrao impulsively reached out and put her arm around the young man’s shoulder. Big mistake, thought Mirza. The man has just been boy-ed. Sure enough, her act of kindness breached the boundaries of Kirorimal’s fragile self-control, and he began snivelling like a child. So much for the kotwal swagger. Under our uniforms, we are all the same fearful dust.

Mirza waited for Kirorimal’s heaves to subside. When he was calmer, Umrao went to the kitchen. ‘Talk to Ghalib uncle. I will make you some breakfast.’ Mirza motioned to the young man to sit on the rug on the floor, offering a bolster.

‘The important question is,’ Mirza mused as Kirorimal made himself comfortable, ‘if the Angrez soldiers are so interested in the case, why did they simply not remove you and take over? After all, you are no more than a child and it is easy enough for them to do.’

Kirorimal appeared a bit aggrieved at this characterization of him but did not protest. ‘My uncle had an opinion on that,’ he replied. ‘He felt that none of the Angrez soldiers would want to be saddled with any direct responsibility for such a high-profile case. The price of failure appears to be too high. Moreover, just like me, they are clueless about how this part of Shahjahanabad works. In fact, forgive me, but I presumptuously sent word, both to Captain Hodson and Magistrate Metcalfe asking for their approval to consult you as a “cultural expert” in the case. I have no doubt it will be approved, and you will be appointed an investigator. Thank you for agreeing to help me, uncle. And thank God you are a detective as well as a poet!’

‘I am hardly a detective.’ Mirza resisted the temptation to preen. ‘My forefathers have been in the army and police and militia, so I was always interested in solving crime. When I was in Lucknow almost thirty years ago, I solved a crime that made me a bit famous. But that subsided. I only got started in Delhi when a series of burglaries were reported three years ago at Ballimaran. Pieced the clues together, and realized the robber had to be a blacksmith. They raided three blacksmiths’ houses and found the loot in one of them. Word got around, and I have been consulted on a few other petty crimes, cattle running, liquor thefts, and such. I poke around, ask questions, and look for patterns. That’s all.’

‘Please, uncle, this is no time for false modesty. Besides my uncle, a few other people I talked to were unanimous in their opinion that when crimes are baffling, Mirza Ghalib is the one who should be called in. You have solved cases involving farmers, moneylenders, and herders. I can only imagine how much easier it would be for you to look into events involving poets. The approval of your status as an official investigator will come latest by tomorrow. If you could accompany me tomorrow to the haveli, I would be most grateful.’

Mirza hesitated momentarily before making his mind up. He loved the excitement of solving mysteries, but he wasn’t entirely sure he should get mixed up in the affairs of the haveli, given his history with the Nawab and his wife. Nevertheless, it appeared there was no way he could recuse himself.

Excerpted with permission from Murder At The Mushaira, Raza Mir, Aleph Book Company. Read more about the book here and buy it here.

The Dispatch is present across a number of social media platforms. Subscribe to our YouTube channel for exciting videos; join us on Facebook, Intagram and Twitter for quick updates and discussions. We are also available on the Telegram. Follow us on Pinterest for thousands of pictures and graphics. We care to respond to text messages on WhatsApp at 8082480136 [No calls accepted]. To contribute an article or pitch a story idea, write to us at [email protected] |Click to know more about The Dispatch, our standards and policies
TagsAleph Book Company Historical fiction Murder at the Mushaira Raza Mir