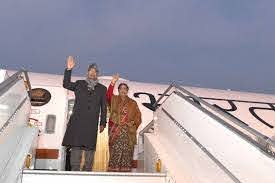 Reliance Industries Limited chairman Mukesh Ambani on Saturday said that “bold reforms” introduced under the leadership of Prime Minister Narendra Modi will pave the way for India’s rapid economic progress in the years to come.
Addressing Pandit Deendayal Petroleum University’s (PDPU) students virtually during the convocation ceremony, he said “his (PM Modi) passionate and dynamic leadership has made the world sit up and take notice of the emergence of a new India. His confidence and conviction have inspired and galvanised the entire nation.”

“I am sure that the bold reforms introduced under his leadership will pave the way for India’s swift recovery and rapid economic progress in the years to come,” Ambani added.
Talking about days when PM Modi was Gujarat chief minister, he said, “…all of us know that PDPU itself is a product of Honourable Prime Minister Narendra bhai’s ‘Atma Nirbhar’ vision. It is a vision he cherished even when he was the Chief Minister of Gujarat…”

“PDPU is only fourteen years old. Yet, it already ranks among the top-25 in the Atal Ranking of Institutions on innovation,” Ambani said.
On the country’s energy needs, the RIL chairman said, “The future of energy is being shaped by unprecedented changes. And these changes are impacting the future of humanity — indeed, the very future of our planet.”
“The most important question we face is this: Can we produce the growing amounts of energy we need to sustain our economies without harming the environment?” he said.

Continuing of the topic of climate change, Ambani added that “without failing” we need to fulfil our Climate Change obligations.
Over the future energy prospects, he said, “We need breakthroughs in new energy sources such as green and blue hydrogen. We also need great innovations in energy storage, saving and utilisation.”
“What makes it even more exciting is the synergy between the Energy Revolution and the Fourth Industrial Revolution. If we master this synergy, we will surely be able to make India one of the most prosperous nations in the world. An India that guarantees prosperity and wellbeing for all 1.3 billion Indians,” the Reliance Chairman added.