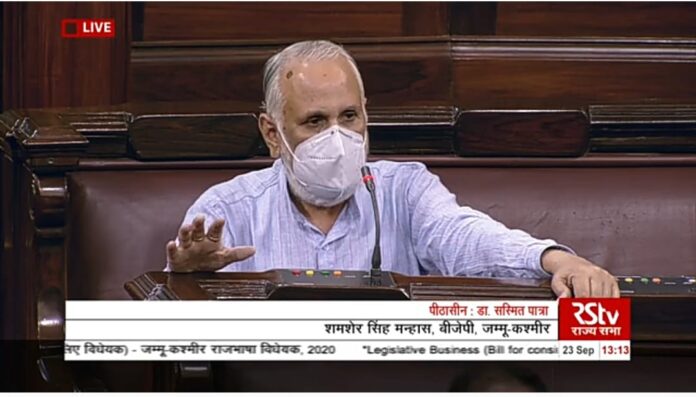 Member of Parliament Rajya Sabha Shamsher Singh Manhas while speaking on Jammu and Kashmir Languages bill 2020 raised the demand for announcing holiday on the birth eve of Maharaja Hari Singh,
It is pertinent to mention here that this issue has been raised again and again by the various social organisations of Jammu and Kashmir and even a common dogra has been rasing voice in favour of this demand and recently one of the organisation threatend to be on roads against the government for ignoring such an important issue.

MP Manhas also targeted Senior Congress Leader and Rajya Sabha MP Ghulam Nabi Azad that he has done nothing for the people of Jammu although he also belongs to the Jammu region , even another senior Congress Leader Dr. Karan Singh kept silent over these issues of Dogri Language and dogra culture.

Manhas while praising the efforts of Prime minister narendra modi and Amit Shah said that the important and bold steps regarding
Jammu and Kashmir in recent past followed by this important bill is historical and an overwhelming response is being witnessed from the common masses of the area especially from the dogri speaking people.
and we are expecting some more developments to boost the confidence of people especially to promote other regional languages and cultural identity of the area.