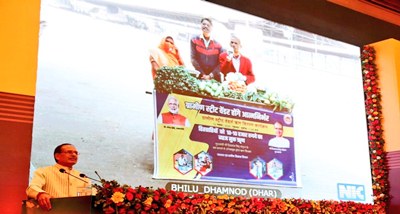 On this occasion, the Chief Minister said  special attention will be given to education and health in self-sufficient Madhya Pradesh.
A network of hospitals will be established across the state for this purpose.

He further said that there will also be a focus on employment and economy and small and cottage industries will be encouraged.

He also transferred the interest-free loan of 10 thousand rupees each into the accounts of rural street vendors under the Chief Minister rural Street Vendor Loan Scheme. Mr. Chouhan also interacted with beneficiaries of some districts via video conferencing.

The Mukhya Mantri Rural Street Vendor Scheme has been launched by the state government, on the line of Pradhanmantri street vendor scheme. Its objective is to make available an amount up to 10 thousand rupees as working capital loan through banks to the street vendors in rural areas.

The eligible beneficiaries of this scheme are also exempt from the amount of stamp duty.