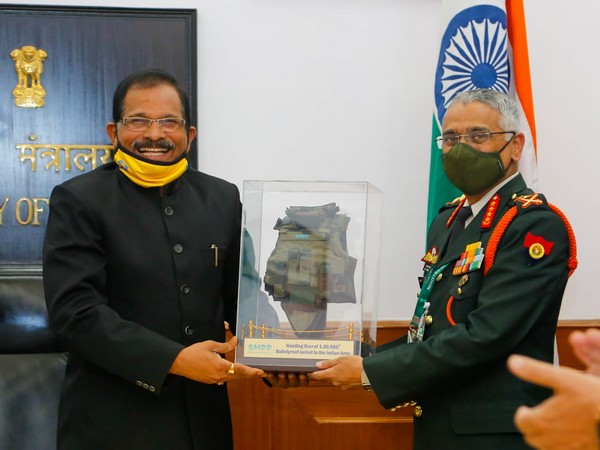 Minister of State for Defence Shripad Yesso Naik handed over One Hundred thousandth Bullet Proof Jacket to Army Chief General M M Naravane in a ceremony held in New Delhi. Speaking on the occasion, Mr Naik said, the Government has honoured its commitment of protecting the precious lives of our soldiers fighting the enemy. He said, the government led by Prime Minister Narendra Modi places high emphasis on the operational safety of the soldiers.

The Minister assured that the Government will ensure that the soldiers will be provided with the best of weapons and protective armour and such requirements will always remain uppermost in priority. He appreciated the manufacturers, M/s SMPP Private Limited for supplying the first one lakh Jackets, four months ahead of the delivery schedule.

The Minister said, the Bullet Proof Jacket being supplied is an indigenous product under Make in India and the company is even exporting the product all over the world making India a global hub for supply of such Defence ware in line with the Atma Nirbhar Bharat initiative of the government. He said this Jacket has been appreciated by our soldiers who are using them on the borders and in countering insurgency.