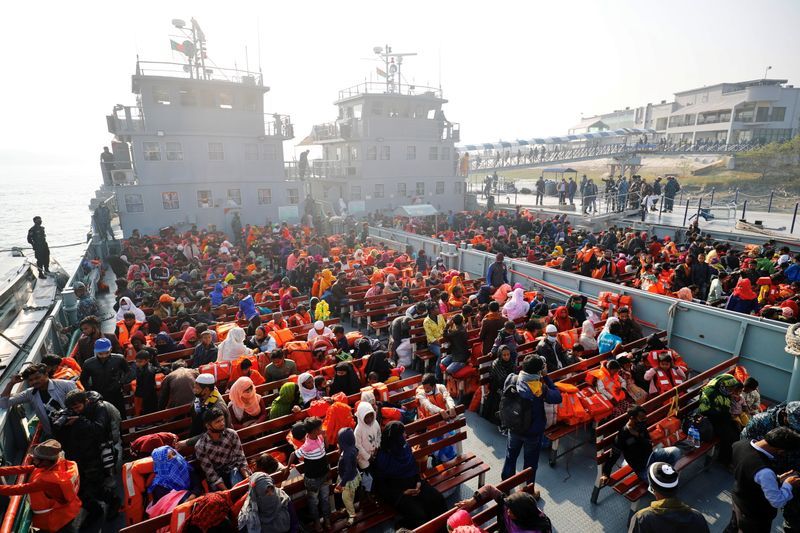 BHASAN CHAR, Bangladesh: Bangladesh moved a second group of Rohingya Muslim refugees to a low-lying island in the Bay of Bengal on Tuesday, despite opposition from rights groups worried about the new site’s vulnerability to storms.

The United Nations says it has not been involved in the relocation but urged the government to ensure no refugee is forced to move to Bhasan Char island, which only emerged from the sea 20 years ago.

The Bangladesh navy took the 1,804 Rohingya to the island in five ships, with the refugees sitting on wooden benches on deck, some clutching ducks, pigeons and chickens in bamboo baskets and wearing orange life vests and masks against the coronavirus.

A first group of 1,642 Rohingya, members of a minority group who have fled from violence in Myanmar, were relocated from their camps near the Myanmar border to the isolated island earlier in the month.

The move has faced opposition, especially from aid groups worried about a disaster in a country that regularly faces severe weather, especially along its coast.

Upon reaching the island, navy personnel on a jetty helped the refugees ashore, many of them with sacks of belongings slung over their shoulders.

“Bhasan Char is better,” said one middle-aged man who arrived with his wife and three children from a refugee camp of bamboo and plastic shelters packed across muddy hills near the Myanmar border, where some one million Rohingya live.

The man said the head of his old camp had convinced him that the island was a better option.

Reuters is withholding the names of refugees going to the island because of the controversy surrounding the relocation with many refugees keen to stay on the mainland and opposed to the move.

Tractor trailers and army trucks took the refugees to their new concrete homes and bunk beds. Navy officials took a Reuters photographer to a farm where sheep grazed on the greenish-gray grass overlooked by a watchtower.

The government says the relocation is voluntary but some refugees from the first group have spoken about being coerced to go. The human rights group Amnesty International also expressed concern.

“(A) lack of transparency in the consultation process with refugees, and allegations from within the community about cash incentives being offered to Rohingya families to relocate to Bhashan Char as well as use of intimidation tactics are making the relocation process questionable,” the group said.

“The Rohingya people who have shifted there are very happy with the arrangement. Some evil groups are spreading negative propaganda,” he said.

Two Rohingya men told Reuters they moved to their new home voluntarily, one to join relatives, the other in “hope of a better life” with his wife and six children.

“There’s so much suffering and conflict in the camp,” said the father, referring to his old refugee-camp home.

A young Rohingya man, who moved in the first group, sent Reuters a phone video of his new room with bedding for four, and said he was urging friends back in the camps to consider the island.

“Happy with everything here but feeling anxious for my friends and teachers,” the 18-year-old said.

“They don’t want to come here. They’ve got used to the camps.”

‘The sea is all we know’: Thai villagers fight industrial zone
How COVID-19 may result in one million excess deaths from other diseases in Africa
Comment