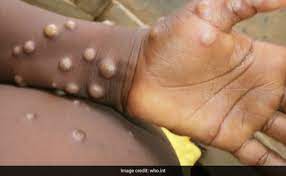 SRSRINAGAR: With the cases of Monkeypox confirmed in Europe, authorities in Jammu and Kashmir have issued advisory and directed concerned officials to isolate suspected cases immediately.

“As you are aware, there is recent outbreak of Monkeypox cases in Europe as well as United States and Australia. This is a Zoonotic disease, first identified in monkeys and it is also spread by rodents. The clinical presentation of Monkeypox resembles that of Smallpox,” reads the letter issued to Chief Medical Officers of Jammu division by Dr. Harjeet Rai Epidemiologist/SSO IDSP Jammu Division”.

“On 20″ of May 2022, the Ministry of Health & Family Welfare (MoHFW) Gol issued an interim Health Advisory regarding the Monkeypox. This office prepares a PowerPoint presentation in detail on the subject. You are requested to kindly disseminate the advisory among all health care workers of your district for their sensitization and further necessary action,” it adds.

As per the advisory, the key points about the disease include that Monkeypox is a viral zoonotic disease that occurs primarily in tropical rainforest areas of Central and West Africa and is occasionally exported to other regions.

“Monkeypox typically presents clinically with fever, rash and swollen lymph nodes and may lead to a range of medical complications, it is usually a self-limited disease with the symptoms lasting from 2 to 4 weeks. Severe cases can occur. Case fatality rate may vary from 1-10%.

Monkeypox can be transmitted from Animal to Human as well as human to human. The virus enters the body through broken skin (even if not visible), respiratory tract, or mucous membranes (eyes, nose, or mouth). animal-to-human transmission may occur by bite or scratch, bush meat preparation, direct contact with body fluids or lesion material, or indirect contact with lesion material, such as through contaminated bedding, it reads.

Similarly, the advisory said the clinical presentation of monkeypox resembles that of smallpox, a related orthopoxvirus infection which was declared eradicated worldwide in 1980.

“Incubation period is usually 7-14 days but can range from 5-21 days and the person is usually not contagious during this period and an infected person may transmit the disease from 1-2 days before appearance of the rash and remain contagious till all the scabs fall off,” it adds.

As per the advisory, the recommended public health actions include that health facilities to keep heightened suspicion in people who present with an otherwise unexplained rash and who have travelled, in the last 21 days, to a country that has recently had confirmed or suspected cases of monkeypox or report contact with a person or people with confirmed or suspected monkey pox.

“All suspected cases to be isolated at designated healthcare facilities until all lesions have resolved and a fresh layer of skin has formed OR until the treating physician decides to end isolation and all such patients to be reported to the District Surveillance Officer of Integrated Disease Surveillance Programme.”

“All infection control practices to be followed while treating such patient, laboratory samples consisting of fluid from vesicles, blood, sputum etc to be sent to NIV Pune for Monkey pox testing in case of suspicion and in case a positive case is detected, contact tracing has to be initiated immediately to identify the contacts of the patient in the last 21 days,” reads the advisory—(KNO)