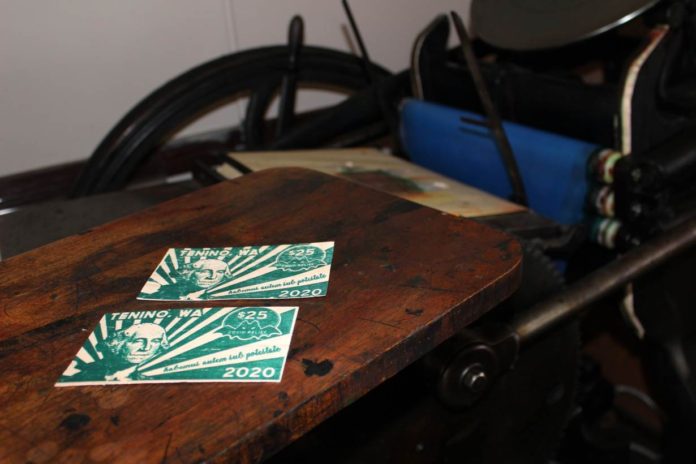 TENINO: Tucked away under lock and key in a former railroad depot turned small-town museum in the U.S. state of Washington, a wooden printing press cranked back to life to mint currency after nearly 90 dormant years.

The end product: $25 wooden bills bearing the town’s name – Tenino – with the words “COVID Relief” superimposed on the image of a bat and the Latin phrase “Habemus autem sub potestate” (We have it under control) printed in cursive.

With the coronavirus pandemic plunging the United States into a recession, decimating small businesses and causing job losses across the country, some local governments are looking for innovative ways to help residents weather the storm.

For Tenino, the answer was the revival of the local currency that had bolstered the town’s economy in 1931 in the wake of the Great Depression.

“It was kind of an epiphany: Why don’t we do that again?” Mayor Wayne Fournier told the Thomson Reuters Foundation. “It only made sense.”

Anyone with a documented loss of income as a result of the pandemic is eligible for up to $300 a month of the local currency.

Businesses up and down the town’s quaint Main Street accept the wooden note for everything except alcohol, tobacco, cannabis and lottery tickets.

Tenino’s city government backs the local currency, which merchants can exchange for U.S. dollars at city hall at a 1:1 rate.

“The City of Barcelona gave donations (in 2017/18) to sports teams and cultural groups as well as social programs (then) watched these donations go to big box stores,” she said in emailed comments.

“So, it created a local currency so that these ‘discretionary’ funds in its budget would circle back to support locally-owned businesses.”

‘WOVEN INTO OUR DNA’

Mayor Fournier noted that, for long-time Tenino residents, the wooden notes are nothing new.

The tiny town founded around a sandstone quarry achieved national prominence in 1931 when civic leaders printed a wooden local currency to restore consumer confidence after the town’s bank failed during the Great Depression.

“This is woven into the DNA of the community,” Fournier said. “My great aunt Erlene has the family collection all stashed away.”

The mayor brought the idea of resurrecting the town’s legacy project to the city council as a way to provide economic relief to businesses and residents suffering as a result of lockdown measures to slow the spread of COVID-19.

In April councillors approved the proposal to issue up to $10,000 in local scrip.

So far, 13 residents have successfully applied for the funds and some $2,500 worth of wooden bills have been issued, Fournier said, with donations upping the total funds available to $16,000.

FROM THE GROUND UP

Fournier views the project as the kind of initiative towns and small cities must take upon themselves to survive the coronavirus outbreak amid what he views as an inadequate federal response.

He pointed out that the federal Paycheck Protection Program (PPP), a fund of forgivable loans designed to keep businesses afloat through the pandemic, is not scaled for the businesses in Tenino that have just a handful of employees.

“A federal program dumps money from the top and these blue-chip companies steal it all,” Fournier said. “If we do it from the ground up, there’s no stealing. It’s a direct ballast to Main Street.”

From the outset, the unprecedented first-come-first-served program struggled with technology and paperwork problems that led some businesses to miss out while some affluent firms got funds they did not necessarily need.

“From mom-and-pop shops on Main Street to local employers who are anchors in our community, we have seen the PPP save millions of jobs and keep small firms moving forward,” said Jeremy Field, the regional administrator for the Small Business Administration, which oversees the program.

He noted in emailed comments that 86.5% of loans granted nationally were for less than $150,000 and that the program covered almost three-quarters of the small business payroll in Washington state.

Fournier said he has already fielded queries from towns across the country looking to emulate Tenino’s effort.

So far, however, Tenino’s currency does not appear to be circulating much among local businesses.

At the grocery and hardware store that anchors Main Street, manager Chris Hamilton said that by mid-June customers had spent $150 in the local bills to buy necessities like groceries and a new faucet to replace a broken tap.

“I’ll redeem it for cash at city hall,” he said. “I hadn’t thought about recirculating it.”

Next door at Don Juan’s Mexican Kitchen, owner Juan Martinez Jr. has four of the wooden $25 notes sitting in his cash register.

In a case of history repeating, he said coin collectors have offered to buy the bills from him for double their value in U.S. dollars.

Back in the 1930s, coin collectors fueled a speculative rise in the value of the town’s wooden scrip, according to Washington state online encyclopedia HistoryLink.

The Schumacher Center for a New Economics has documented more than 50 local alternative currencies globally that were active as of summer 2019.

They range from the artfully designed Brixton Pound in London, England, to the Mumbuca, which bankrolls the basic income scheme in Marica, Brazil.

The center also sponsors BerkShares, a local currency that has been circulating in the Berkshire region of western Massachusetts for 14 years.

Witt cautions that notes backed by U.S. dollars are only a halfway measure, because the amount of local currency available is limited by the amount of federal dollars the town has on hand to exchange it with.

“A truly independent currency would allow for issuing currency as needed,” she said.

That “new” money would circulate through the local economy and then eventually go toward paying property taxes over the course of several years, she added.

But, for now, Witt said, Tenino’s project is an effective way to empower a community being brought to its knees by factors beyond its control.

“I don’t believe the good people of Tenino meant for their wooden (banknotes) to serve as a robust local currency,” she said.

“They are instead making an important point. COVID and the lack of federal response to the crisis has motivated municipalities to explore what could be done with their own currencies.”