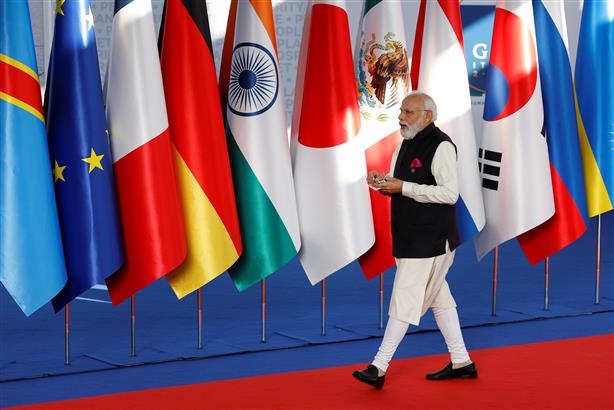 Jammu: As India formally takes over the G20 presidency today, it is also the moment of Jammu and Kashmir to showcase it economic potential, tourism assets, and culture before the world powers.

While the G20 leaders’ summit –the top event –shall be held in New Delhi on September 9 and 10, 2023, under its presidency year India has lined up 200 events to be held in different parts of the country. Six events in Jammu and Kashmir and two in Ladakh are likely on the schedule.

Sessions like T-20 summit, think tank summit, W-20 women’s summit and Y-20 youth summit are among the 200 events that will be held as part of the G20 summit. These seminars and meetings will focus on health, labour, finance, environment, education, renewable energy, climate change, the pandemic and other important issues around the world.

By planning to host some G20 events in Jammu and Kashmir, India has made a major diplomatic statement to the world community, particularly to China and Pakistan. Soon after it was known that Jammu and Kashmir and Ladakh Union Territories shall be the venues for some of the G20 events, China and Pakistan were quick to raise their objection. Interestingly, China is also a member of the G20 grouping. Pakistan is also reported to have reached Islamabad’s key allies China, Saudi Arabia and Turkey to leverage their influence but that has not yielded any response. The world community, particularly the G20 members have not reacted to China’s and Pakistan’s criticism of holding global events in Jammu and Kashmir and Ladakh.

Following the reading down of Article 370, granting special status to Jammu and Kashmir, the Government of India organised two high-profile visits of international dignitaries to Kashmir. There was a delegation of Diplomats and one of the European Parliamentarians who met with a select group of people in Srinagar and Jammu.

On June 23, the Jammu and Kashmir governments constituted a five-member high-level committee under Principal Secretary Dheeraj Gupta for coordination with the Center on hosting G20 meetings in the Union Territory.

G20 brings together 19 of the world’ leading economies and the European Union, with its members accounting for more than 80% of global GDP, 75% of global trade and 60% of the global population, according to the MEA.

Commerce and Industry Minister Piyush Goyal was appointed as India’s Sherpa for the G20 in September 2021. According to the Ministry of External Affairs, India will hold the G-20 presidency from December 1, 2022, and convene the first G20 leaders’ summit in 2023.

India’s representation at G20 summits has been led by Prime Minister Modi since 2014.

The previous 17 Presidencies of the G20 delivered significant results – for ensuring macro-economic stability, rationalising international taxation, relieving debt-burden on countries, among many other outcomes. We will benefit from these achievements, and build further upon them.

However, as India assumes this important mantle, I ask myself – can the G20 go further still? Can we catalyse a fundamental mindset shift, to benefit humanity as a whole?

I believe we can.

Our mindsets are shaped by our circumstances. Through all of history, humanity lived in scarcity. We fought for limited resources, because our survival depended on denying them to others. Confrontation and competition – between ideas, ideologies and identities – became the norm.

Unfortunately, we remain trapped in the same zero-sum mindset even today. We see it when countries fight over territory or resources. We see it when supplies of essential goods are weaponised. We see it when vaccines are hoarded by a few, even as billions remain vulnerable.

Some may argue that confrontation and greed are just human nature. I disagree. If humans were inherently selfish, what would explain the lasting appeal of so many spiritual traditions that advocate the fundamental one-ness of us all?

One such tradition, popular in India, sees all living beings, and even inanimate things, as composed of the same five basic elements – the panch tatva of earth, water, fire, air and space. Harmony among these elements – within us and between us – is essential for our physical, social and environmental well-being.

India’s G20 Presidency will work to promote this universal sense of one-ness. Hence our theme – ‘One Earth, One Family, One Future’.

This is not just a slogan. It takes into account recent changes in human circumstances, which we have collectively failed to appreciate.

Today, we have the means to produce enough to meet the basic needs of all people in the world.

Today, we do not need to fight for our survival – our era need not be one of war. Indeed, it must not be one!

Today, the greatest challenges we face – climate change, terrorism, and pandemics – can be solved not by fighting each other, but only by acting together.

Fortunately, today’s technology also gives us the means to address problems on a humanity-wide scale. The massive virtual worlds that we inhabit today demonstrate the scalability of digital technologies.

Housing one-sixth of humanity, and with its immense diversity of languages, religions, customs and beliefs, India is a microcosm of the world.

With the oldest-known traditions of collective decision-making, India contributes to the foundational DNA of democracy. As the mother of democracy, India’s national consensus is forged not by diktat, but by blending millions of free voices into one harmonious melody.

Today, India is the fastest growing large economy. Our citizen-centric governance model takes care of even our most marginalised citizens, while nurturing the creative genius of our talented youth.

We have tried to make national development not an exercise in top-down governance, but rather a citizen-led ‘people’s movement’.

We have leveraged technology to create digital public goods that are open, inclusive and inter-operable. These have delivered revolutionary progress in fields as varied as social protection, financial inclusion, and electronic payments.

For all these reasons, India’s experiences can provide insights for possible global solutions.

During our G20 Presidency, we shall present India’s experiences, learnings and models as possible templates for others, particularly the developing world.

Our G20 priorities will be shaped in consultation with not just our G20 partners, but also our fellow-travellers in the global South, whose voice often goes unheard.

Our priorities will focus on healing our ‘One Earth’, creating harmony within our ‘One Family’ and giving hope for our ‘One Future’.

For healing our planet, we will encourage sustainable and environment-friendly lifestyles, based on India’s tradition of trusteeship towards nature.

For promoting harmony within the human family, we will seek to depoliticise the global supply of food, fertilizers and medical products, so that geo-political tensions do not lead to humanitarian crises. As in our own families, those whose needs are the greatest must always be our first concern.

For imbuing hope in our future generations, we will encourage an honest conversation among the most powerful countries – on mitigating risks posed by weapons of mass destruction and enhancing global security.

India’s G20 agenda will be inclusive, ambitious, action-oriented, and decisive.

Let us join together to make India’s G20 Presidency a Presidency of healing, harmony and hope.

Let us work together to shape a new paradigm – of human-centric globalisation.