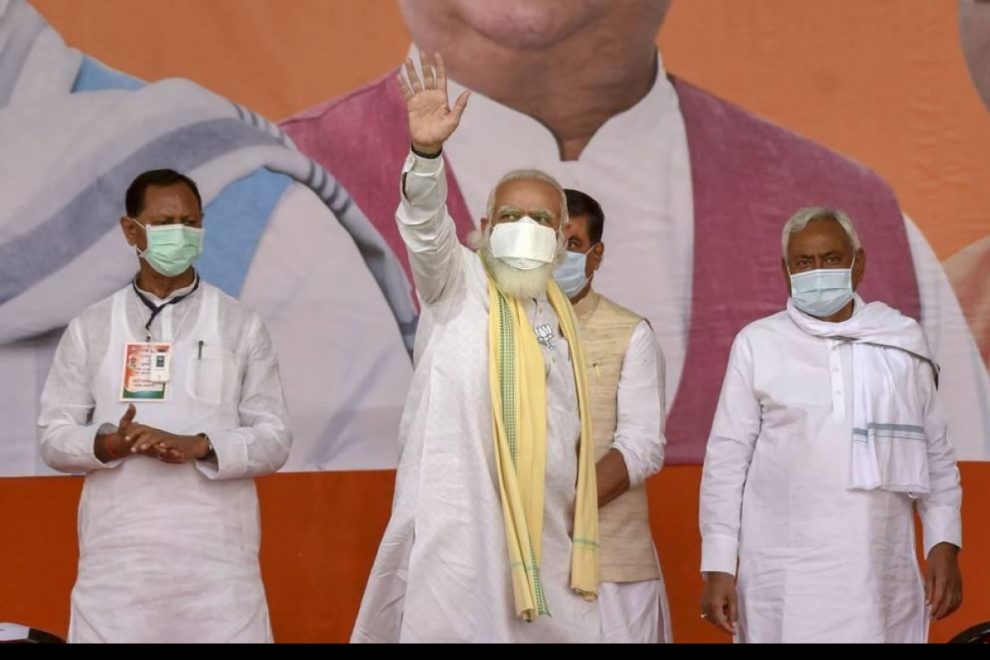 In the wake of authoritarian tendencies and wrong policies at the national level, the mahagatbandhan under the leadership of the young RJD leader Tejashwi Yadav was able to challenge the formidable JD(U)-BJP combine in the Bihar Assembly elections. Political analysts pointed out that Chief Minister Nitish Kumar’s alignment with the BJP resulted in the latter gaining a commanding position. Though the so-called partisan media had been trying to project that there is no alternative to Prime Minister Modi, in reality, there is clamour all round that his government’s social and economic policies had pushed the country to a precarious situation.

However, one has to agree that though in Bihar the Modi magic was evident, the next round of Assembly elections, scheduled 2021, will analyse the efficacy of the NDAs policies and programmes. The great actor that Modi is, he could mesmerise his audience, but it is generally believed that “You can fool all the people some of the time and some of the people all the time, but you cannot fool all the people all the time.” The big question will be whether this would be proved wrong in the next round.

The critical state of the economy with price rise, unemployment and underemployment as also lack of opportunities has affected States across greatly. The rural population is struggling to make both ends meet. Additionally, the Covid pandemic, which all States are fighting with very little funding and support from the Centre, is adding to the burden. All States, specially those in the East and North, are in a precarious position and great pressure with huge number of Covid cases and arranging for their treatment being a tall task given the health infrastructure is very poor. In fact, in most districts of Bihar or West Bengal, there is only one hospital to cater to increasing diseases as also Covid testing and treatment.

The general feeling that the youth in Bihar voted for change is quite understandable. In fact, though caste may be a crucial factor in States like Bihar, with little education and awareness increasing, the economic factor, specially of lack of jobs and rural distress, became more critical. This is not to deny that caste, which is an important factor in the country, did play up in the electoral battle and shall continue to be crucial. However, a sense of hopelessness among the young generation, below the age group of 35-40 years, did not go unnoticed.

The promise of 10 lakh jobs by Tejashwi Yadav, who emerged as a ‘star’ in the State, must have caught the imagination of the youth. In this connection, the migrant voter, most of whom are yet to get employment, is said to have gone against the NDA. Migrant labour has been centring the agenda of the Bihar elections and this helped the RJD to emerge as the single largest party. Its partner Congress’ performance, however, remains much to be desired.

Rather, it’s surprising why the Congress could not capitalise on the incumbency factor as also the inept handling of the migrants’ issue and have lead political to question why the Grand old party was allowed to contest such a large number of seats when its base was not strong enough to take on the BJP or the JD(U). However, the Left parties that fought within the Mahagatbandhan performed very well and captured 16 seats, over 80 per cent of the seats they contested.

As Bihar campaigning and results have shown, elections today are increasingly becoming competitive. In over 50 seats of the 243 Assembly, the competition was very terse, which points to the fact that people were confused and did not have a clear vision or for that matter were not convinced with the poll promises being made. Both sides fought the elections with various positive and negative points, though two issues –the severe economic crisis plaguing the country and curtailment of human rights or citizens’ safety were very much leading the agenda.

Besides, though the JD(U) performed below expectations, one needs to point out that backward castes and the dalits, who may not generate and peddle a narrative of their own but are categorical in their political choice, had been the core support base of Nitish Kumar. Analysts believe that the JD(U) dismal showing, losing around 30 seats, may be attributed to LJP’s Chirag Paswan going it alone this time with the unofficial blessings of the BJP.

Though Nitish Kumar has been retained as the Chief Minister, the JD (U) has been reduced to a secondary partner with very little power at his hands. The clean and capable face of good governance of Nitish Kumar, though marred in the anti-incumbency wave, has been exploited by the BJP over the years and now its expansionist policy will be manifest slowly and steadily, as has been its general strategy across States. And though it did far better than the JD(U), Nitish’s good governance and popularity would still be a factor.

Whether the Modi magic continues to be vibrant or not will now be gauged when about three States, including West Bengal, are due for elections next year. Political analysts are of the opinion that in West Bengal or in Tamil Nadu, the voter profile is quite different and false promises and assurances may not help. Moreover, in spite of best efforts, the BJP has not been successful in finding a prominent leader to lead the party in the States and lacks the popularity and maturity factor in its State Presidents.

The social and economic situation in spite of tall promises and programmes is clearly not encouraging and may not improve significantly in the coming five-six months though some change may be forthcoming at the end of the third quarter. Thus, the crucial issues before the next States’ elections, early next year, would be job creation and enlargement of livelihood opportunities. In the past, the young generation has worked to the advantage of the BJP but this may no longer be the situation now as in the Bihar polls, it benefitted the Opposition parties. The BJP leadership is quite aware of the challenges it may face in West Bengal, specially the grass-root base of Mamata Banerjee’s government and her developmental policies reaching a wide section of the population. The only silver lining for the BJP is the dissentions within the TMC itself and an important firebrand leader who may form his own regional outfit. Whether the Modi magic is still valid, only the results of the forthcoming State elections shall reveal.