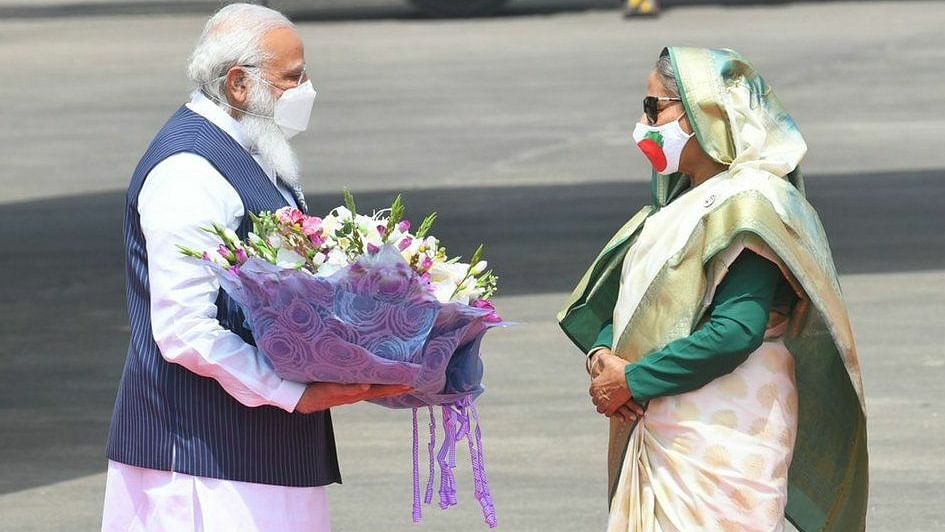 Prime Minister Narendra Modi was in Bangladesh on 26-27 March to be a part of the neighbour’s 50th year celebration of independence. This was his first visit abroad since the breakout of Covid 19 pandemic. It drew considerable attention in both countries in view of deepening relations between the two as well as the growth of Bangladesh from a ‘basket case’ to a developing country. It is another matter that quite a few people protested vigorously against the visit and about four people died in the police action.

Interestingly, Modi’s visit is expected to enhance New Delhi’s ‘Look East Policy’, which the Prime Minister has formed into ‘Act East Policy’. Despite a bright start in 2014 when heads of all SAARC countries were invited for the oath taking ceremony of the NDA government, New Delhi’s relations with the neighbours have back slided. New Delhi is not talking to Pakistan, is a bystander on the explosive fight within the ruling party of Nepal, abstaining on a UN resolution on Sri Lanka, equivocating on the deadly protest for restoration of democracy in Myanmar. The only country that perhaps has cordial and warm relations with India is Bangladesh.

Arguably, sound bilateralism between India and Bangladesh is more due to Prime Minister Sheikh Hasina’s sense of publication and understanding of India’s role in liberation of Bangladesh and thereafter than any of the government’s so-called initiatives to enrich the ties between the two countries. Thanks to Hasina’s broader perspective on the mutual ties, the anti-CAA protest did not go out of hand. If it was another regime things could have been worse.

I have said in this column that CAA was uncalled for within the country and an avoidable irritant in our neighborhood consisting of four Muslim majority countries. Although the tension, rising out of CAA, has for the time being apparently died down. The implementation of the same as promised or threatened for some people by the ruling party during the Assembly elections campaigns, may raise hackles once again at home and abroad.

Talking of the visit, Modi did impress the host as he does best. To start with he carried with him as guests carry goodies, 1.2 million vaccines as gift. Dhaka had already bought 2 million vaccines of Astrazeneca. The government says Bangladesh is the biggest recipient of the Indian vaccines, topping the list of the countries in New Delhi’s vaccine diplomacy. Seriously though, the production of the vaccine in India in record time and its generous distribution to at least 53 countries has definitely upgraded India’s image in the world. It has begun to be perceived as the manufacturing hub in the pharma sector especially for the critical drugs. The latest endorsements of such a perception was experienced in the last Quad Summit where it was agreed that India will produce vaccines with American technology, Japanese funds and distributed through Australian networks.

In Dhaka, Modi visited the National Martyrs Museum to pay tribute to Bangladesh’s father of the nation Sheikh Mujibur Rahman. He also conferred the Gandhi Peace award to him, which was received by his daughters, the Prime Minister of Bangladesh and Sheikh Rehana. Sheikh Hasina while receiving the award deeply thanked the government of India in assisting her father during Bangladesh war 1971 and recognising his contribution and sacrifice for his people.

Modi was the guest of honor on National Day celebration in the Parade ground where he paid tribute to the Indian soldiers who laid their lives in the Bangladesh war. He also shared his own struggle (Satyagraha) for Bangladesh’s liberation. Such a nice vignette for his political life, so far unknown, has pleasantly surprised many. He announced Swarna Jayanti Scholarship for the students and youth of Bangladesh pursuing research and innovation. That is a part of an ongoing contribution to development of science and technology in Bangladesh. There was also talk of transfer of nuclear technology for peaceful use.

The other interesting feature of the visit was Modi’s invitation to 50 entrepreneurs from Bangladesh to join the startups in India and make investment. Many observers see this as the wheels of history making a full circle as Bangladesh a recipient of India’s donations is invited to make capital investment instead. It is no wonder as Bangladesh seems to have overtaken India in global trade and investment and certainly in the per capita GDP. One can have arguments on GDP ratio to size of the population and its growth but the fact remains.

Modi visited the famous temple of the Matua guru/goddess in Orakandi in Gopalganj. Matuas a large segment of Dalits in Bangladesh has migrated to West Bengal. While Modi said that he prayed at the altar of Goddess Kali for saving mankind from the scourge of Covid 19; although his critics back home interpret it as reaching out to Matua community in Bengal, which is in the midst of elections right now. Coincidentally, his visit to the temple was on the day when the voters in Bengal were casting their votes in the first leg of eight-phase elections.

In addition to the social, cultural and historical dimensions of the visit there were five MOUs inked between New Delhi and Dhaka. Although this is a usual drill in most bilateral visits, this  time the MOUs cover areas of connectivity, commerce, information and technology and sports. Coming back to vaccines, Modi handed over a tool box as a symbolic representation of handing over of 1.2 million vaccines. He also gifted the keys of 109 Ambulance as India’s support to health care, and combating the pandemic in particular.

The symbolism of goodwill and friendship was on full display as Sheikh Hasina as return gesture presented silver and a gold coin on the birth centenary of her father and another silver coin for the 50th year of Bangladesh’s independence.

In sum, the visit has been productive, paying diplomatic dividends to New Delhi. However, what was not reported in the public domain was the lengthening shadow of China on India-Bangladesh relations. Reading between the lines of Dhaka’s foreign affairs adviser Gowher Rizvi’s statement to the media ‘that we do not do anything with China that will harm our traditional long standing relations with New Delhi’. At any rate Beijing is ‘buying off’ New Delhi’s neighbours ‘to cut India to size in its neighborhood in India-Pacific region.

New Delhi has to take serious cognisance of Beijing’s sinister moves and counter these. The best way to do so is to help the neighbours strengthen their democracy and pluralism. Again New Delhi could inspire them on their democratic journey by being a pathfinder. So the ball is in New Delhi’s court in building sound neighborhood policy, be it Bangladesh or any other country.

Round The States
Delhi Government: Beyond Party Politics
Comment