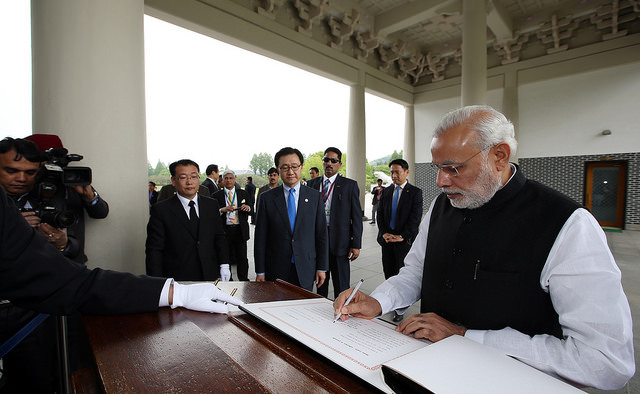 The completion of one year of Modi government’s second term in office presents a good opportunity to reflect on the achievements and drawbacks on the foreign policy of the country. It is perhaps necessary to take stock as Narendra Modi raised the hopes of Indians of making it a big power with a 5-trillion USD economy. Newspaper articles by the government admirers and neutral observers began to appear to suggest that India is an emerging superpower. Is that so? Is there any sign of progress towards that aspiration?

Admittedly, like any other country, India’s foreign policy primarily seeks to widen its contacts, enhance its presence among the comity of nations. But the claim and consequence should correspond each other. The objective of this piece is to examine the veracity of such a claim by identifying the challenges as well as opportunities in pursuit of India’s aspiration.  It will also attempt to evaluate the strategies adopted by South Block to overcome the challenges.

The year 2021 more than before presented a litany of challenges to Government of India in conducting both its internal governance and external relations. The rise of China and its new expansionism tops the list of challenges. As China went through several phases of its foreign policy from security to economy, then to the urge for being the biggest power in the world.  In the process, China linked up with the Soviet Union, delinked from it and developed alliance with United States and other western countries for building its economy. And now to achieve international glory, it has challenged US supremacy and has realigned with Russia, which inherited the legacy of power from the former Soviet Union.

While Beijing was adjusting and readjusting with world powers to promote its foreign policy objectives, New Delhi was simply reacting to China-led developments. New Delhi did not grasp the power of economy, hence initially distanced from the US and European countries, leaning on Soviet Union for its veto on Kashmir. New Delhi allowed its foreign policy to be largely determined by the issue of Kashmir and Pakistani involvement therein, to the detriment of India’s long term interests as a world power. That is why, although China and India began together as post-colonial countries, China’s economy is five-times bigger than India’s and its military is far superior at least in terms of size and investment.

The economy is so strong a detriment of foreign policy that even the European Union countries, despite the call for isolating China, have gone ahead to conclude the negotiations for a EU-China Comprehensive Agreement on Investment. The concern for trade and commerce has debunked the myth of European’s defending human rights and civil liberties across the world.

Second, India’s growing convergence with the US has led to the dilution of New Delhi’s links with traditional friends like Russia and Iran. Although experts will advise New Delhi to carefully handle the shifting of balance of power in the region, New Delhi has little option as do the Russians and Iranians. Sanctioned and isolated by the west, Russia has to lean on China for keeping its fragile economy going. Since the Sino-Indian relations are unlikely to improve and the sporadic confrontations between Chinese and Indian armed forces are likely to occur, New Delhi has to make and consolidate its choice of going with the West.

The US-brokered alliance nine months ago between Israel and four Arab countries – the UAE, Bahrain, Morocco and Sudan radically alters the power dynamic in the Middle East and opens up new space. At the time of writing, Israeli Foreign Minister Yair Lapid was in UAE to inaugurate their embassy. The rivalry between Iran and Saudi Arabia continues unabated. New Delhi has bigger room for manoeuvre for its objectives in the oil-rich region. Moreover, an armed conflict between Iran and Israel cannot be ruled out posing a problem for India since it has relations with both countries.

New Delhi seems to be caught in a contradictory strategy of emerging as a world power and self-isolating itself. For Instance, India is no more active in the non-aligned movement (NAM) which it co-founded, the South Asian Association for Regional Cooperation (SAARC), and the Regional Comprehensive Economic Partnership (RCEP). I would agree with India’s detachment from all the three, the first became irrelevant, the second became ineffective and the third was incongruent with India’s strategic objectives. But New Delhi should have come up with better alternative alliances like BIMSTEC and made them more vibrant.

The third challenge which should worry Indians is the weakening of ties with its neighbours. It is evident in the strain in relationship with Bangladesh on NRC issue, and border controversy with Nepal which released a new map and with Sri Lanka on trade and investment. It is true that India is bedevilled by China which practices cheque book diplomacy particularly in Sri Lanka. New Delhi has more assets, different from those of China, to retrieve and rebuild ties with its neighbours. It should redeploy those assets – political and cultural – without any loss of time.

While New Delhi is perceived and pushed to be the geo-political counter-weight to China, the Western powers subscribing to this approach should continue to support India. New Delhi should be ready and willing to receive continuing support from the US, Japan, Australia and European countries like France, Germany and the UK. New Delhi should acknowledge and appreciate the European entry into India-Pacific design as France and Germany have already come with their respective strategies for the region.

Much as New Delhi would like to secure a permanent seat in the UNSC, it should use the opportunity of being the UNSC non-permanent member for the eight times to flag important matters like China’s belligerence from Tibet to Taiwan, refugee crises between Bangladesh and Myanmar and resolution of Israel-Palestine internecine conflict.

At the cost of repetition, led it be reiterated that New Delhi should avoid its foreign policy being influenced by Kashmir developments and determined by Pakistan’s machination on the border. New Delhi should engage the US more, deepen its strategic and defence ties and resolve trade and visa issues. It should give a hand in Afghanistan to help US smoothly withdraw from the war-torn country.

It is difficult to ignore the impact of the outbreak of the pandemic on any country’s policy-making including that of India’s foreign policy. The economy and society got disrupted across the world except in China which registered impressive growth in its economy. India should openly join hands with others demanding a transparent enquiry into the origin of the virus from China, to establish if it was natural or lab-made.

Modi government has made some impressive gains in the foreign policy. To list a few, it has made solid contact with the leadership of US and other countries. Although those leaders demitted office, their initiatives had got institutionalised which helps India as a friend and as an ally. Another notable achievement is that of New Delhi’s engagement with India’s Diaspora. Decoupling of Israel and Palestine is another note-worthy achievement.

Having said it all on both New Delhi’s successes and failures, India’s foreign policy needs a lot more fresh thinking on its emergence as a sound economy, strong democracy and a credible world power.