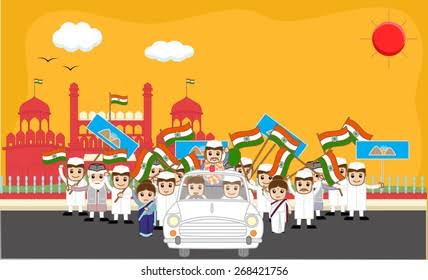 The Dispatch Staff
Add Comment
The Congress, at a big loss, chooses still to put up a strong front, terming the crossing over as part of BJP’s “Operation Kichad (muck)’ and the “break” was fast-tracked because of ‘Bharat Jodo yatra’s’ visible success.

Eyeing Himachal Polls
The timing of the Union Cabinet approving a Constitution amendment Bill, seeking to grant tribal status to certain communities in some States has raised eyebrows. More so, as the ruling BJP is expected to benefit from it in the Himachal Pradesh elections in November. On Wednesday, the approval was given to the Hatti community in Trans-Giri region of Sirmaur district, among other communities in Scheduled Tribes list in Chhattisgarh, Tamil Nadu, Karnataka and Uttar Pradesh. The demand it is said to be pending since over 50 years. In Himachal, the decision is expected to benefit 1.6 lakh Hatti people, which form an electorally influential community and may favour the ruling BJP, which had swept the polls in 2017, winning 44 of the 68 seats. This time round, AAP has entered the fray turning the polls to be a three-cornered fight other than the Congress. According to calculations, the Hatti community is concentrated in the four constituencies and could play a significant role in at least nine seats in Shimla (once a Congress stronghold) and Sirmaur. Importantly, BJP was the first party to recognise the demand during 2009 Assembly polls and since is incorporating it in its manifesto. The community has put its weight behind it and the timing shall be decisive.

Inactive Political Parties
Bogus political parties are getting weeded out. On Tuesday last, the Election Commission ordered delisting of 86 ‘non-existent’ registered unrecognised political parties (RUPPs), in ‘larger public interest and for purity of electoral democracy’. The number of such parties failing to comply with electoral rules has gone up to 537, since May 25! An additional 253 RUPPs were declared as ‘inactive’. The action follows a physical verification by Chief Electoral Officers of concerned States/UTs such as Bihar, Delhi, Karnataka, Maharashtra, Tamil Nadu, Telangana and Uttar Pradesh or is based on reports of ‘undelivered letters/notices from postal authority’. Worse, these RUPPs hadn’t contested either a single State Assembly or General elections and were still enjoying benefits under Symbols Order, 1968, which mandated putting up 5% of total candidates in Assembly polls. While the delisting, says the EC will help voters make an ‘informed decision’, it must re-look at the electoral bond scheme, which many political parties say lacks transparency. Incidentally, BJP is its biggest beneficiary bagging 94.5% of the bonds worth over Rs 210 crore. Will it question the Government?

Bengal’s Street Fights
Enough is enough, doesn’t apply to at least West Bengal. The street fights in parts of Kolkata and Howarh on Tuesday last between arch rivals, the ruling TMC and opposition BJP, are getting worse. The areas turned into a battlefield as BJP cadres clashed with the police, burnt a police vehicle and beat up a cop, while trying to get past barricades to prevent their march towards the secretariat, to protest against the alleged corrupt practices of TMC. While the BJP accused Chief Minister Mamata Banerjee of not giving political space to the opposition and it was her cadres which stage managed the hooliganism, the TMC said “it’s a bigger game plan to destabilise the State this festive season.” Will Mamata take a cue from her UP counterpart and rein in BJP ‘hooligans”? Her articulate MP Mahua Moitra’s tweet gives an idea. She tweeted: ‘Whether the West Bengal government should follow UP’s system and bulldoze houses of saffron camp leaders, which damaged public property…Will BJP stand by its own policy or get their chadds in a twist?’

‘Operation Lotus’ In Punjab
First Delhi and now Punjab. The AAP accuses BJP of running ‘Operation Lotus’ to buy its MLAs and topple Bhagwant Mann’s government! On Wednesday last, Delhi Chief Minister Kejriwal claimed the BJP attempted to buy ‘10 party MLAs in Punjab by offering them Rs 25 crore each and ministerial posts.” Similar accusation was made last month but the attempt was thwarted in Delhi amidst high drama. In Chandigarh, Punjab Finance Minister Cheema said the MLAs were assured “a meeting will be arranged with ‘vadde baau ji’ (big brother) and offered Rs 50-70 crore if they brought three-four MLAs.” Plus, BJP had kept aside “Rs 1,375 crore to topple the government, (break away 55 of the 92 MLAs)” like a kitty of Rs 800 crore in Delhi. BJP’s state unit says it’s ‘a bundle of lies’ and AAP was only ‘trying to divert people’s attention from its failures.’ But AAP insists ‘phone calls were made to MLAs’ and following a complaint, the Punjab police has registered an FIR under Prevention of Corruption Act and IPC. Will it crack the case? Or will AAP look as running out of ideas to taint its rival?

‘Lawless’ Bihar
Is ‘jungle raj’ back in Bihar? The shocking incident of four gunmen going on a rampage in Begusarai district, killing a man and critically injuring 11 people, should have Chief Minister Nitish Kumar worried. Suspension of seven cops for dereliction of duty is a reaction oft seen. But that two motorcycle-borne gunmen went on a rampage firing indiscriminately at people in crowded areas Barauni Thermal Chowk, Barauni, Teghra, Bachwara and Rajendra Bridge, doesn’t bode well for the administration. While four suspects are arrested, security beefed up in the district and all entry points barricaded after the shooting, Nitish says he senses a ‘conspiracy’. Whose? The BJP offers an answer: “Whenever a ‘Mahagathbandan’ government comes to power, law and order situation starts deteriorating”. Nitish and his deputy Tejaswi Yadav must prove it wrong.

Join The Dispatch Whatsapp Group to stay updated
The Dispatch is present across a number of social media platforms. Subscribe to our YouTube channel for exciting videos; join us on Facebook, Intagram and Twitter for quick updates and discussions. We are also available on the Telegram. Follow us on Pinterest for thousands of pictures and graphics. We care to respond to text messages on WhatsApp at 8082480136 [No calls accepted]. To contribute an article or pitch a story idea, write to us at [email protected]patch.in |Click to know more about The Dispatch, our standards and policies
TagsThe Dispatch