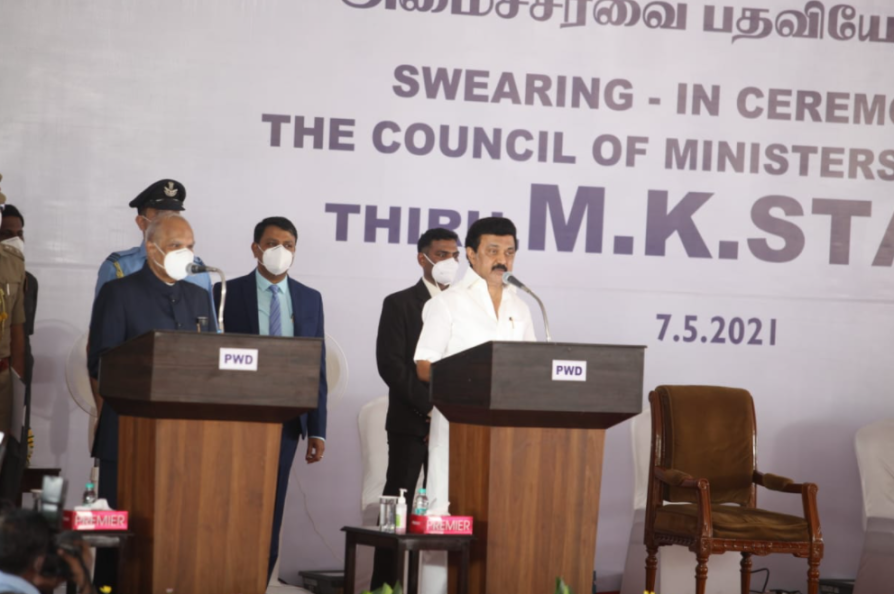 The Tamil Nadu cabinet led by Chief Minister MK Stalin was sworn in today. The state Governor Banwarilal Purohit administered the oath of office and secrecy to Mr Stalin and his 33 other cabinet colleagues at a function held in the Raj Bhavan lawns in Chennai this morning. The function was attended by the leaders of the ruling DMK’s alliance parties, opposition AIADMK coordinator O.Panneerselvam, the state BJP senior leader L.Ganesan, PMK president GK Mani and the Makkal Needhi Maiyyam leader Kamal Haasan.

Mr Stalin later took the blessings of his mother, and paid homage to the party founder CN Annadurai, Dravidian Movement leader EVR Periyaar, his father and former chief minister M.Karunanidhi and other senior leaders of his party.

The Chief Minister has a series of official engagements this afternoon. He is expected to interact with the district collectors on virtual mode. It is for reviewing the measures being taken to contain the pandemic. Availability of oxygen and medicines and the pace of vaccination and the preventive measures are said to be on the agenda, as the everyday count of Covid infections, test positivity rate and fatalities show an upward trend. Mr Stalin will also have his maiden cabinet meeting in which he is expected to outline the priorities of his government to his ministerial colleagues, besides taking key decisions.