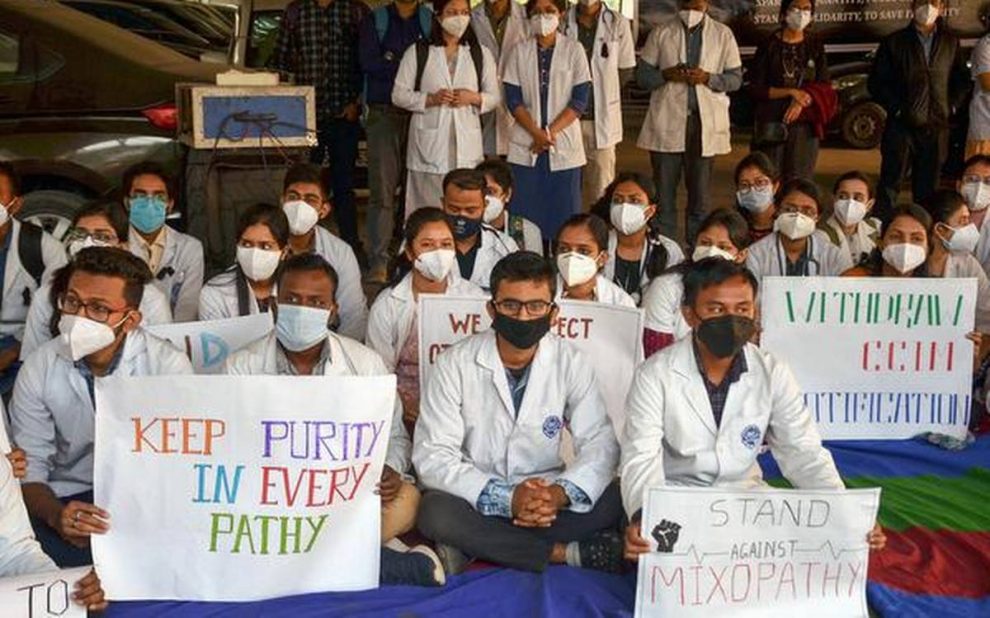 Nationwide protests called by the Indian Medical Association against what it has labeled as “Mixopathy”, i.e. permitting Ayurveda graduates to perform specified surgeries are receiving wide support from allopathic doctors, but only mixed response from the general public, whose interests centre around health without illnesses.

A notification issued by the Central Council of Indian Medicine approving M.S. (General Surgery) for Ayurveda graduates to perform 58 types of surgeries is the cause of protests by several government and private doctors. They think that the idea would create confusion among patients and the public in addition to the practical problem of training ayurvedic practitioners.

The notification listed the surgical procedures that a post-graduate medical student of ayurveda must be “practically trained to acquaint with as well as to independently perform”. The list comprises 39 general surgeries (Shalya Tantra in ayurveda), and 19 specialised procedures involving the eye, ear, nose, and throat (Shalakya Tantra in ayurveda). This opening is thought of as the road to reach universal health coverage.

The IMA is also concerned about the decision of NITI Ayog to set up four committees for integrating various systems of medicine in medical education, practice, public health and administration, and research. It says that the move would lead to the death of modern system of medicine. It is reported that IMA is even thinking of approaching the Supreme Court – the destination of all aggrieved parties whatever the nature of the dispute.

But, the idea of integration is not new. It was proposed by Vajpayee government which also established Medicinal Plants Board in 2000 to coordinate all matters relating to medicinal plants and to support growth of trade, export, conservation and cultivation of medicinal plants. It promoted export of indigenous medicines. Surgeries in the selected fields have already been going on in ayurveda institutes and the notification will have the effect of conferring legality by amendments to Regulations of 2016.

Ayurveda is one of the oldest indigenous systems of medicine known in the world. Many countries have developed their own unique Traditional Medicine systems which are still being practised despite the spread of science-based modern allopathic medicine.

Traditional Medicine (TM) is defined by the WHO as the sum total of knowledge or practices, whether explicable or inexplicable, used in diagnosing, preventing, or eliminating a physical, mental, or social disease which may rely exclusively on past experience or observations handed down from generation to generation. It shares knowledge unlike modern medicine that  recognises ownership and patent.

Traditional Medicines are still going strong in Asia, particularly in China, Korea, and Japan where these are included in the national healthcare systems and developed in national health policies. It is over 3,000 years old in China like Indian ayurveda and spread to many East Asian countries. Nearly 40% of healthcare in China still apply TM and many allopathic doctors prescribe herbal medicines, which shows that integration of modern and traditional medicine may not face as much hurdle as in India. TM is a big attraction for medical tourism in China.

Use of traditional medicine differs from country to country today with some regional similarities.  In some African and Asian countries, TM is even given priority in healthcare and given protection against misuse. Peruvian region has outlawed bio-piracy. Several countries – China, Ghana, Malaysia, Nigeria, South Africa, Tanzania, Thailand, and some countries in the Middle East – seem to be attempting to create data bases for indigenous medicines. India is keen on protecting the Western Ghats rich in many natural resources with health and healing properties.

The terms “complementary medicine” and “alternative medicine” denote healthcare practices that are not part of a country’s own traditional and conventional medicine and are not fully integrated with the dominant healthcare system. They are used for all systems other than allopathy. In some countries, the terms are used interchangeably. Ayurveda, Yoga, Siddha, Unani and Homeopathy are covered under these terms.

More and more countries are acknowledging the role of traditional and complementary medicine (TCM) in their health systems. The WHO is publishing Global Report on TCM based on surveys conducted in many countries. The third survey in 2016-18, has noted that the state of TCM is globally improving. By 2018, out of about 200 member-States of WHO, 98 had developed national policies on TCM, 109 had launched national laws or regulations, and 124 had implemented regulations on herbal medicine. Some have separate national policies for TCM and some integrated policies.

WHO African and South-East Asian Regions, which have strong roots in TCM, are ahead of others in promoting TCM with 85% of member-States having national policies. In South-East Asia, 10 out of 11 countries have national policies on TCM and many of them have plans to integrate TCM in national health delivery. American and European regions depend mainly on modern medicine.

The next 10-year strategy (2014-23) of WHO was launched in response to a resolution of the World Health Assembly on traditional medicine. It is designed to support member-States to  develop pro-active policies and implement action plans to strengthen indigenous medicines, practices and practitioners in the health systems and services.

Developments in the medical world have created competition between two systems of medicine in many countries.  The competition in India is so close and somewhat bitter due to the fact that both systems are in popular practice and patronized by many people in all States. Long British rule helped firm establishment of allopathic medicine popularly called “English medicine” and growth of modern medical colleges. Indigenous systems had no such official support.

However, unlike many scientific and technological inventions which have totally replaced the old order, TCM is surviving everywhere sharing popularity and patronage of patients and people along with modern medicine. That is the reason that we are considering integration of old and new systems. Noteworthy is the tendency of many patients to try both systems, and readiness to adopt both for the same ailment. It is asserted that TM produces no side effects, will do no harm even if it does not cure and has a long shelf life with some having no expiry date. There is no anesthesia or anti-biotic in ayurveda. Traditional medical practitioners also resort to laboratory tests for diagnosis and assessment of effects.  TM is much less expensive than modern medicine. While sticking to scientific base for our systems and practices, we cannot ridicule time-tested knowledge accumulated over thousands of years as “Mixopathy”.