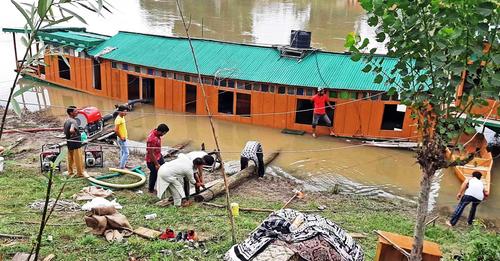 SRINAGAR: Seven tourists and two families had a miraculous escape on Thursday after a houseboat capsized into the Dal Lake following incessant rains in the Kashmir Valley over the past few day.

Mohammad Yousuf, owner of the House Boat said that his houseboat “Kolhai” sank into the Dal Lake today morning and said that besides two families there were seven tourists in the houseboat when it started to sank.

Meanwhile, he said that their house boat is old and they had requested the authorities to give them permission so that they can repair it, however, their pleas fell on deaf ears.

He added that had government allowed them to repair the house boat, this incident would have not happened.

“We are now homeless, as the houseboat has suffered massive damage. We appeal to the authorities to provide compensation, besides permission to repair our house boat,” he said—(KNO)