Kishtwar, Jan 21:Suspected militants lobbed a grenade on a Police Party near Dodpethd on Kishtwar-Chatroo road. However, no damage was reported in the incident.

“A police vehicle with officials was on patrol from Kishtwar to Chatroo when a grenade was tossed at it. The grenade missed the target and exploded on the road,” a police official told news agency.

SSP Kishtwar Harmeet Singh said that the grenade was hurled at Dodpeth area. “There was jo damage reported in the incident. An FIR has been registered and investigations started,” he said. A police official said that the entire area has been cordoned off and a massive search launched to nab the attackers.

Over one crore 66 lakh people vaccinated so far; COVID-19 recovery rate in country touches 97.03 per cent 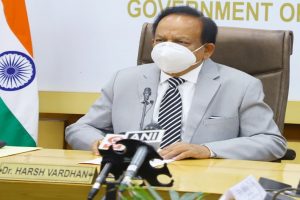 Government allows round clock Covid -19 vaccination to speed up immunisation