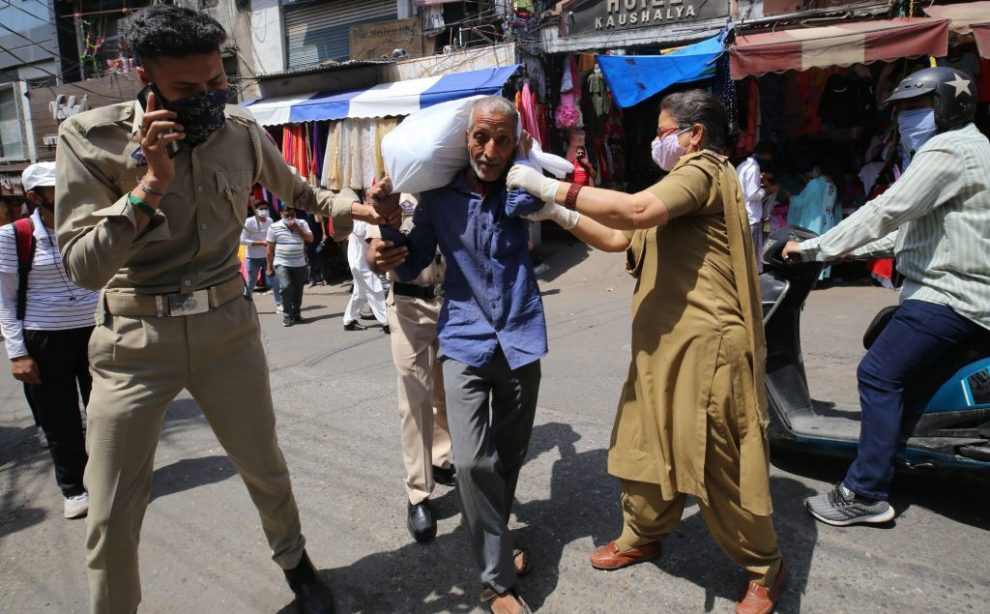 Bhadarwah : Over 240 migrant labourers were screened for COVID-19 on Wednesday in a special drive as they gathered in search of work here in Jammu and Kashmir”s Doda district, officials said.
Of the labourers, six were found to be positive for the infection and were shifted to hospital, they said.

Doda had recorded 64 COVID-related deaths among total 3,553 infected cases since the outbreak of the pandemic last year, while the active cases in the district stands at 60 till Tuesday evening.

In a surprise move, a team of paramedics from sub-district hospital Bhadarwah, along with police, cordoned off the historic Chowgam market early in the morning, where a large number of migrant labourers, mostly from Bihar and Uttar Pradesh, had gathered to be hired by local residents, the officials said.

They said the labourers were subjected to Rapid Antigen Test (RAT) during the drive, which was welcomed by both migrant labourers as well as local residents, who were apprehensive of engaging the labourers in view of a sudden spike in COVID-19 cases across the union territory.

“Despite heavy downpour, we carried on with our first major exercise after the outbreak of the second wave of the infection and tested 240 labourers, out of which six were tested positive and were immediately isolated and shifted to hospital,” Nodal Officer Aarif Khateeb, who was leading the drive, said.

He said the aggressive testing, which was started in Bhadarwah town on Wednesday, would continue to cover all high risk groups.

The labourers extended cooperation to the administration and said they would make themselves available for any test or any kind of verification whenever required.

Mohd Afroz Alam, also from Bihar, said, “I have been working in Bhadarwah since the last six years and when we came here recently, we got tested at Lakhanpur – the gateway to Jammu and Kashmir bordering Punjab.”

“Now, today we again went through the COVID-19 test and the maximum of us turned negative. We are happy with the initiative as the local residents were apprehensive about us in view of a sudden spike across the country,” he said, leaving with a local resident for work.

Additional Deputy Commissioner, Bhadarwah, Rakesh Kumar on Tuesday issued protocols for all passengers and visitors arriving in the additional district by road or on foot through hills.

“All visitors arriving by road or on foot through hills into the jurisdiction of Bhadarwah shall be 100 per cent tested for COVID-19 using RT-PCR or RAT,” an official release said.