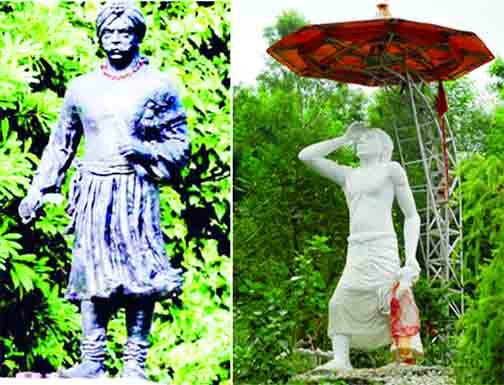 Before the foundation of Jammu and Kashmir state by Maharaja Gulab Singh in 1846-47, the modern Jammu region was divided into twenty-two principalities. It was Raja Ranjit Dev (1733-82) of Jammu who conquered most of the states of the Jammu region and established his sovereignty in these states. But after the death of Raja Ranjit Dev, the grandeur of the Jammu Raj started to decline. The war of succession started between Brijraj Dev and Dalel Singh, the two sons of Raja Ranjit Dev. Consequently, the political stability of Jammu was threatened by both the internal and external forces. The Sikh Misls of Punjab became active and taking advantage of the political crisis of Jammu. However, it was the Sukarchakia Misl chief Mahan Singh who made Jammu as his tributary state. But when, Maharaja Ranjit Singh, the son of Mahan Singh established Lahore Darbar in the early 19th century he started the process of the annexation of the Jammu hill states to the Lahore Darbar. First Maharaja Ranjit Singh attacked Jammu in 1800-01 and compelled the Raja Jit Singh of Jammu to accept the sovereignty of the Lahore Darbar. In 1808 again Jammu was attacked and conquered by Sardar Hukam Singh Chimni, a commander of an army of Maharaja Ranjit Singh. In 1612 Maharaja Ranjit Singh annexed the Jammu state to Lahore Darbar and assigned Jammu to his son Kharak Singh in Jagir.

Although with the annexation of the Jammu to the Lahore Darbar the rule of the indigenous dynasty of Jammu came to an end and both the civil and military administration came in the hands of the officers of the Lahore Darbar, the local leaders of Jammu along with common people resented the establishment of the rule of Lahore Darbar in Jammu. The most effective and long-lasting resistance against the rule of Maharaja Ranjit Singh was made by Mian Dido. He was a Jamwal Rajput and acted as a champion of the cause of common people of Jammu. He was a propagator of the regional identity of Jammu in socio-political and economic terms. He was the son Mian Hazara Singh of Jagti village of Jammu. It is known that when Mian Hazara Singh started to train his son as a swordsman and archer from his childhood. From the days of his childhood, Mian Dido started the hunting of the wild animals and brave deeds became his hobby.

When Jammu came under the political domination of the Lahore Darbar, Mian Dido was very much disturbed and tried to know the cause of the surrender of the political sovereignty of Jammu to Lahore Darbar from his father Mian Hazara Singh. But the latter ignored the query of Mian Dido. However, Mian Dido decided to restore the regional political identity and unite the people of Jammu against the Lahore Darbar. One day he left his house without informing his parents. The latter failed to trace his whereabouts. But in the night Mian Dido he came to his house in the appearance of a warrior. He organised a group of young men and started the process of spreading socio-economic consciousness among the common people. He directed his fellows to start guerrilla warfare against the political authorities and save the people from the economic exploitative activities of the moneylenders (Sahukars). Since the moneylenders were understood to be the worst exploiters of the peasantry during the 19th century, Mian Dido’s initiatives against them received tremendous social support in the hills of Jammu. A large number of oral traditions pertaining to Mian Dido’s works for the welfare of the common people are popular nowadays in Jammu region.

More importantly, Mian Dido waged war against Maharaja Ranjit Singh’s rule in Jammu. With the support of the common people of the region, he frustrated the tax collection process of the officials. Maharaja Ranjit Singh used a huge force under the command of Diwan Bhawani Das to contain the popular resistance of Mian Dido in 1810. But the Diwan succeeded only in establishing his domination in Jammu town and failed to minimise the influence of Mian Dido in large areas of Jammu hills. The resistance against the Prince Kharak Singh was continued by him. Maharaja Ranjit Singh sent some very competent army commanders to capture Mian Dido and spent huge wealth for the suppression his resistance. But all efforts of the Maharaja were frustrated by Mian Dido and most of the time he escaped his capture. Mian Dido’s activities inspired the other social groups of Jammu to fight against the Lahore Darbar. The Chibs and Bhows also started a tough resistance against the rule of Maharaja Singh. The fame of Mian Dido became the dominant socio-political trend of Jammu. He emerged as a folk hero Jammu. He was followed by several other powerful local leaders such as Mian Bhup Dev and Mian Jawahar Singh. The contemporary historians such as Ganesh Das Badehra, the author of Rajdarshani and G.C. Symth, the author of Reigning Family of Lahore record the failure of the military actions of Maharaja Ranjit Singh against Mian Dido. According to Ganeshdas Badehra, “Some Sardars were sent by the Sarkar of Lahore at the head of as many as ten thousand jawans to quell revolts (raised under the leadership of Mian Dido), yet lawlessness did not subside, rather the fire flared up the more.” Several ballads are composed in praise of the chivalry of Mian Dido against the force of the Lahore Darbar. One of the following oral traditions in Dogri language narrates the challenged posed by Mian Dido against Lahore Darbar :

The abovementioned oral tradition may be translated as: Mian Dido hurled his challenge on the enemy. He asked them to clear his land and mind their Lahore and Majha. Mian Dido fell upon them with his sword and struck their heads in the ‘garna’ bushes. Dido Jamwal was not easy to be captured.

The oral traditions of Jammu highlight the brave deeds of Mian Dido for the protection of the rights of the common people, his efforts to deal with the menace of the Sahukars and free the common people from their highhandedness. The oral traditions also depict Mian Dido as an eliminator of the social evils such as dowry system. These oral traditions are very meticulously studied by Professor Ram Nath Shastri and preserved in his book Duggar de Lok Nayak. The popularity of the Mian Dido in Jammu society can be estimated from the fact that the folk songs written in memory of Mian Dido are sung by the common people. The common people of Jammu find themselves nearer to Mian Dido than to the ruling class of the region. The works of Mian Dido for the maintenance of the political and socio-economic identities and autonomy are very much helpful in the study of the cultural history of Jammu region. The study of Mian Dido also reveals that for the people of Jammu their dignity and identity were more important than to enjoy development made by the others.

Tehrik-e-Taliban Pakistan and its Relations with Afghan Taliban
Stamp in his memory released in Kashmir, Jaimal Rathore was killed by Akbar, also admired by Emperor